Update time again, been working away on batches of Fire Warriors of late. I have very nearly finished a squad of 10 Breachers from the newest codex, but today I have a squad of standard Fire Warriors to show: 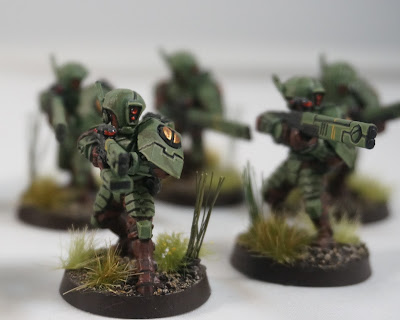 This is my 3rd completed squad of Fire Warriors, and they are still some of my favourite sculpts by GW. I still have 1 box of the 12 man fire warrior team stashed away for future use, I think it was a bad idea on GWs part to put the new box out with 2 less troopers and then hike the cost massively but ill go into that more when I post the breachers up......

Anyway that's it for this rather quick update, I shall likely be back during the week with a small update.

Email ThisBlogThis!Share to TwitterShare to FacebookShare to Pinterest
Labels: Tau