Well I look rather stupid don't I, 2 weeks without a post in a supposedly weekly blog disgraceful.

I do however have valid excuses. first of all I had 2 6 day weeks at work which leave me with little energy to spend on Hobbying, instead I have been reading the rather awesome works of an author called Joe Abercrombie (Highly recommended by the way)

Add to that journeying to the inspiration for Mordor itself known only as Birmingham(Or Brum in my local dialect) with none other than Rictus, to go and see Mongol Horde(A side project of Frank Turners: 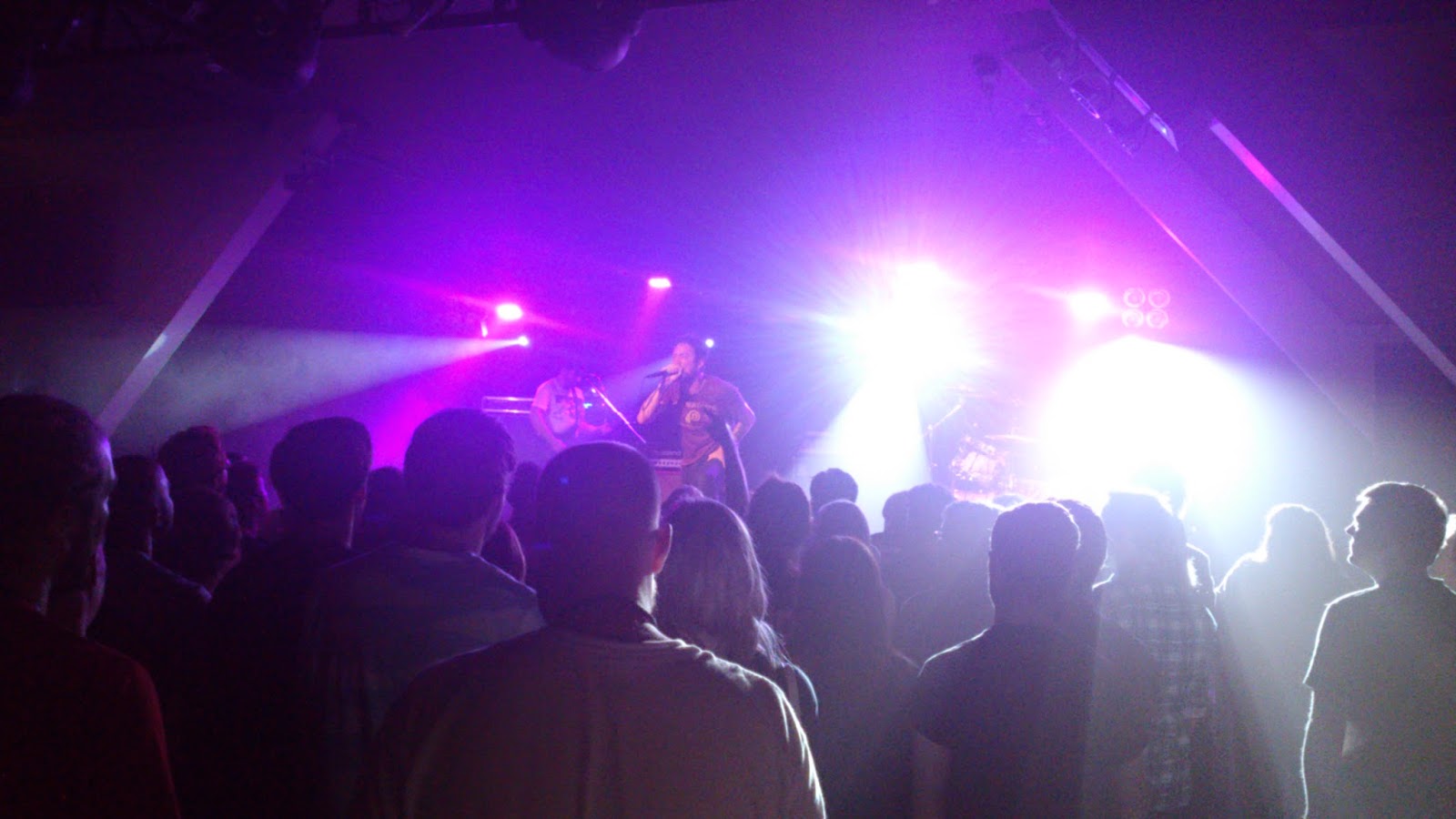 Following that I was then off to the capital for a weekend visiting my brother. 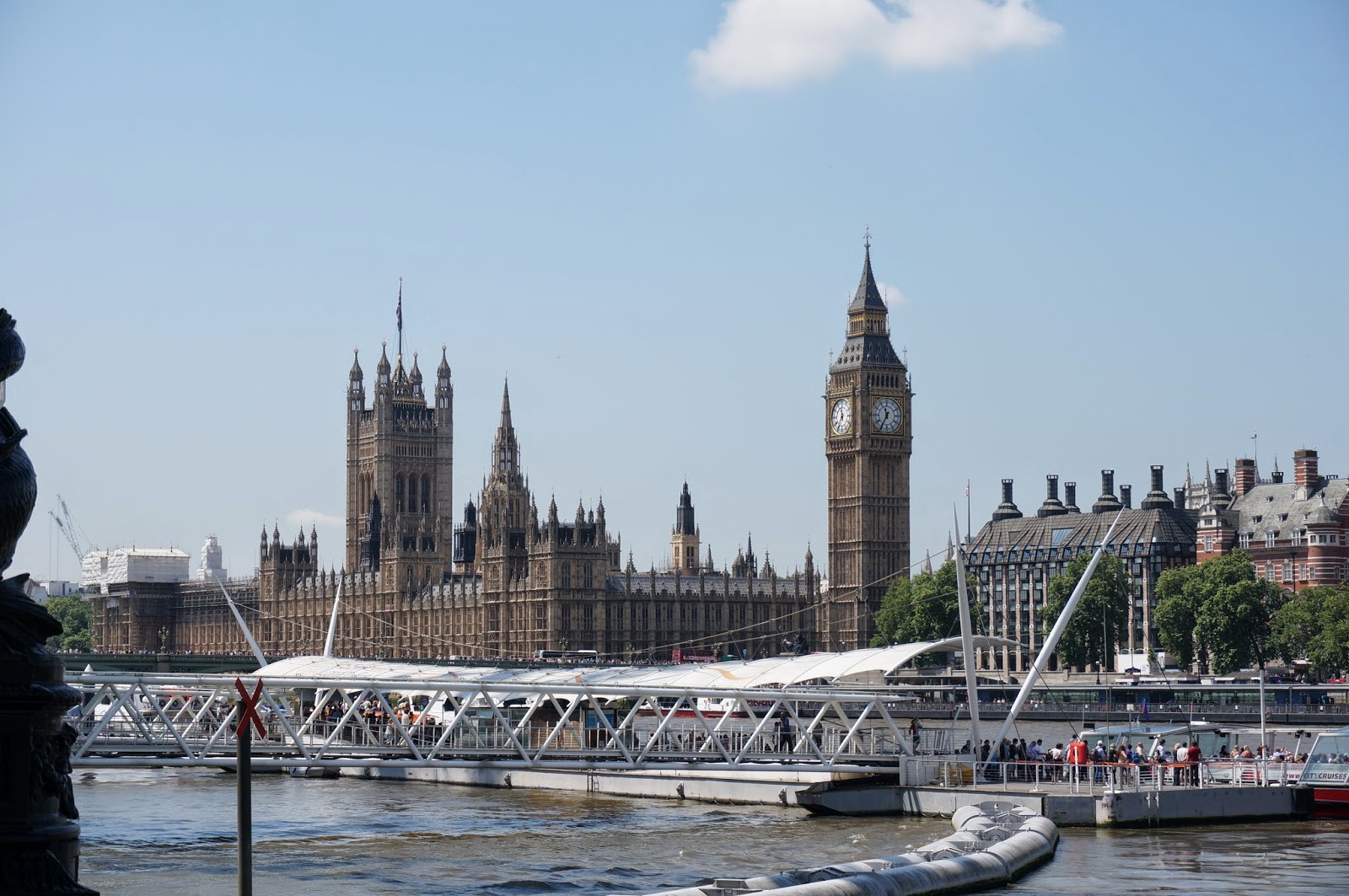 
Anyway onto updates, I have been slowly working away on my infinity stuff, still really enjoying it. I have finished the first of my Order Sergeants: 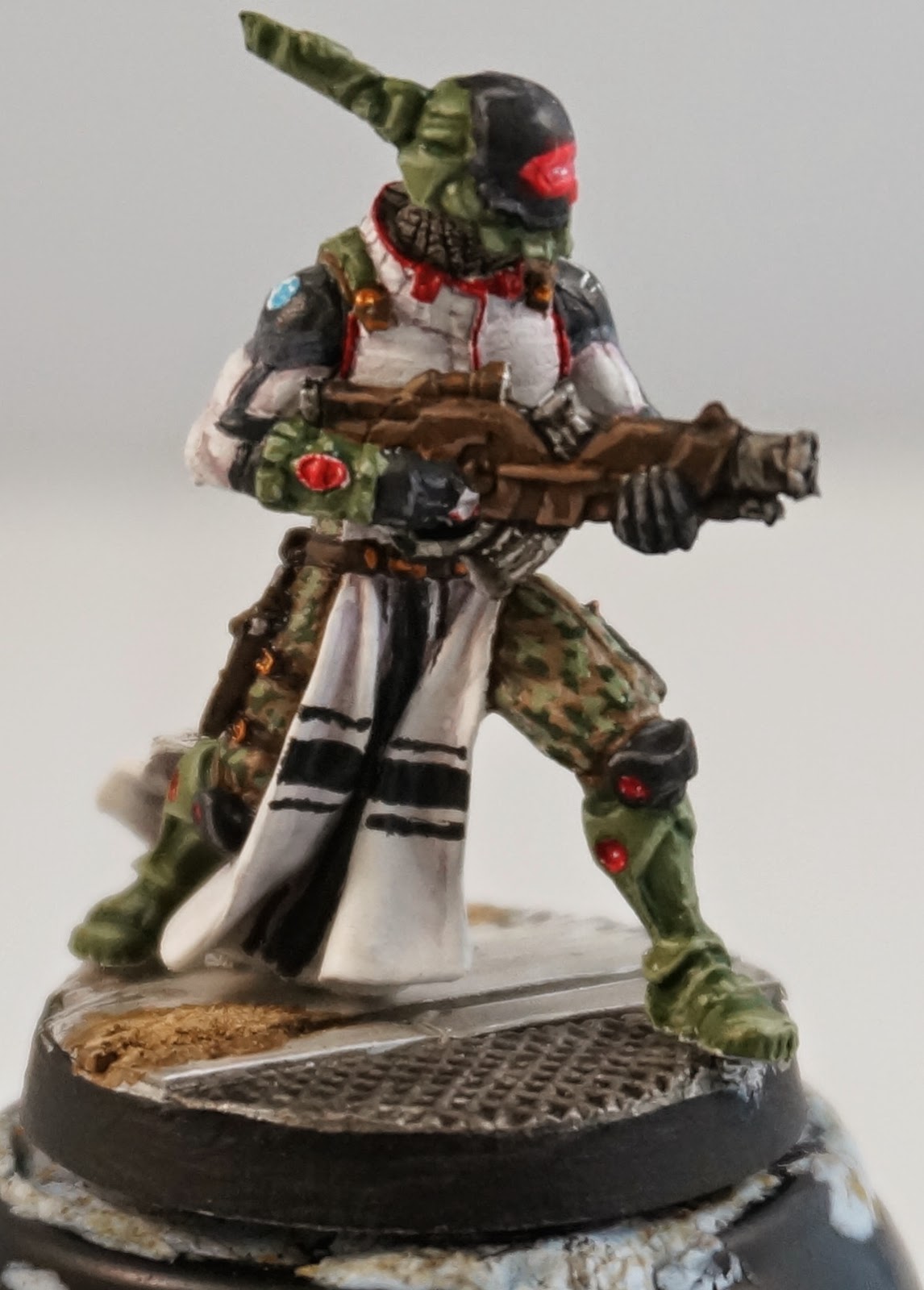 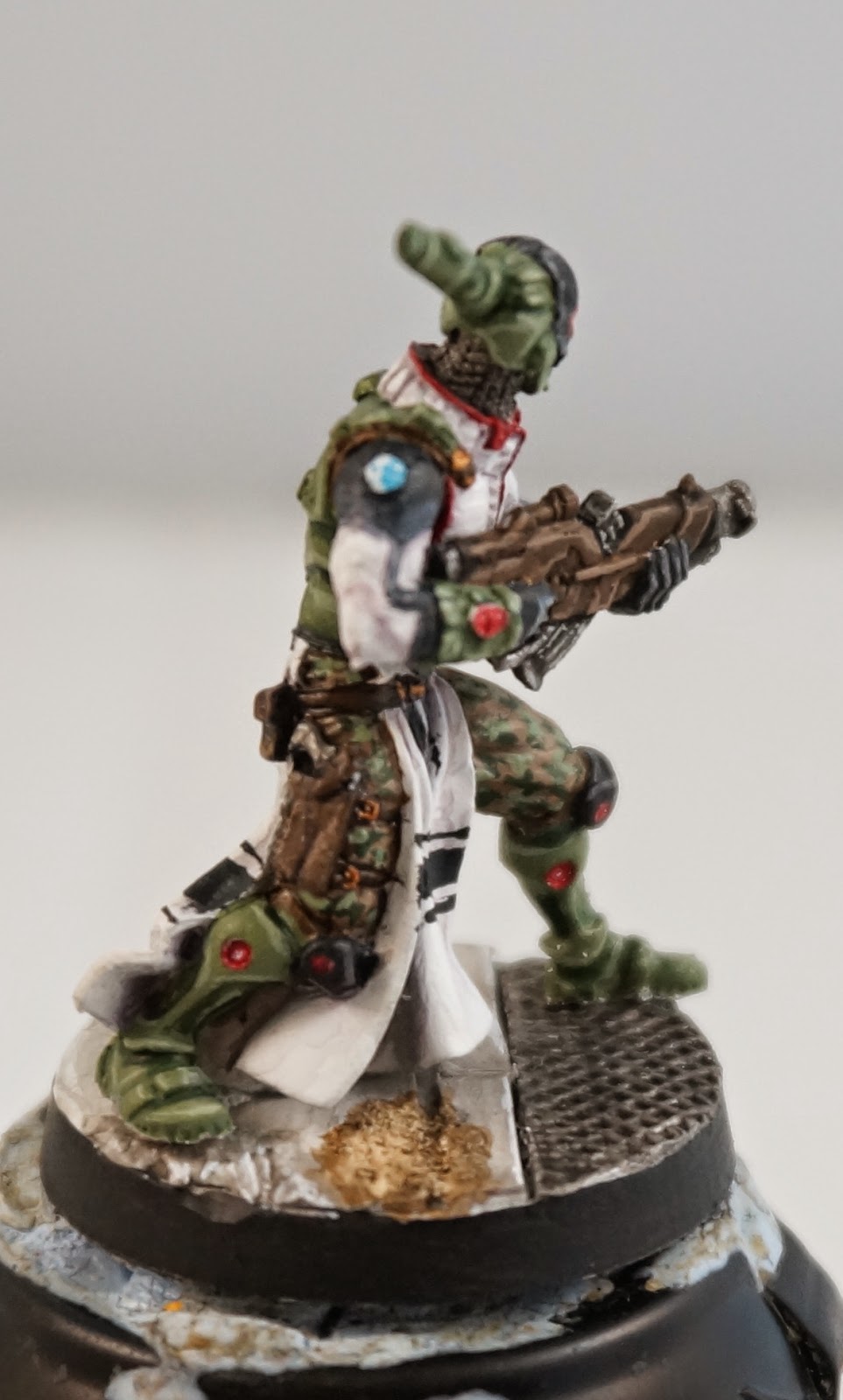 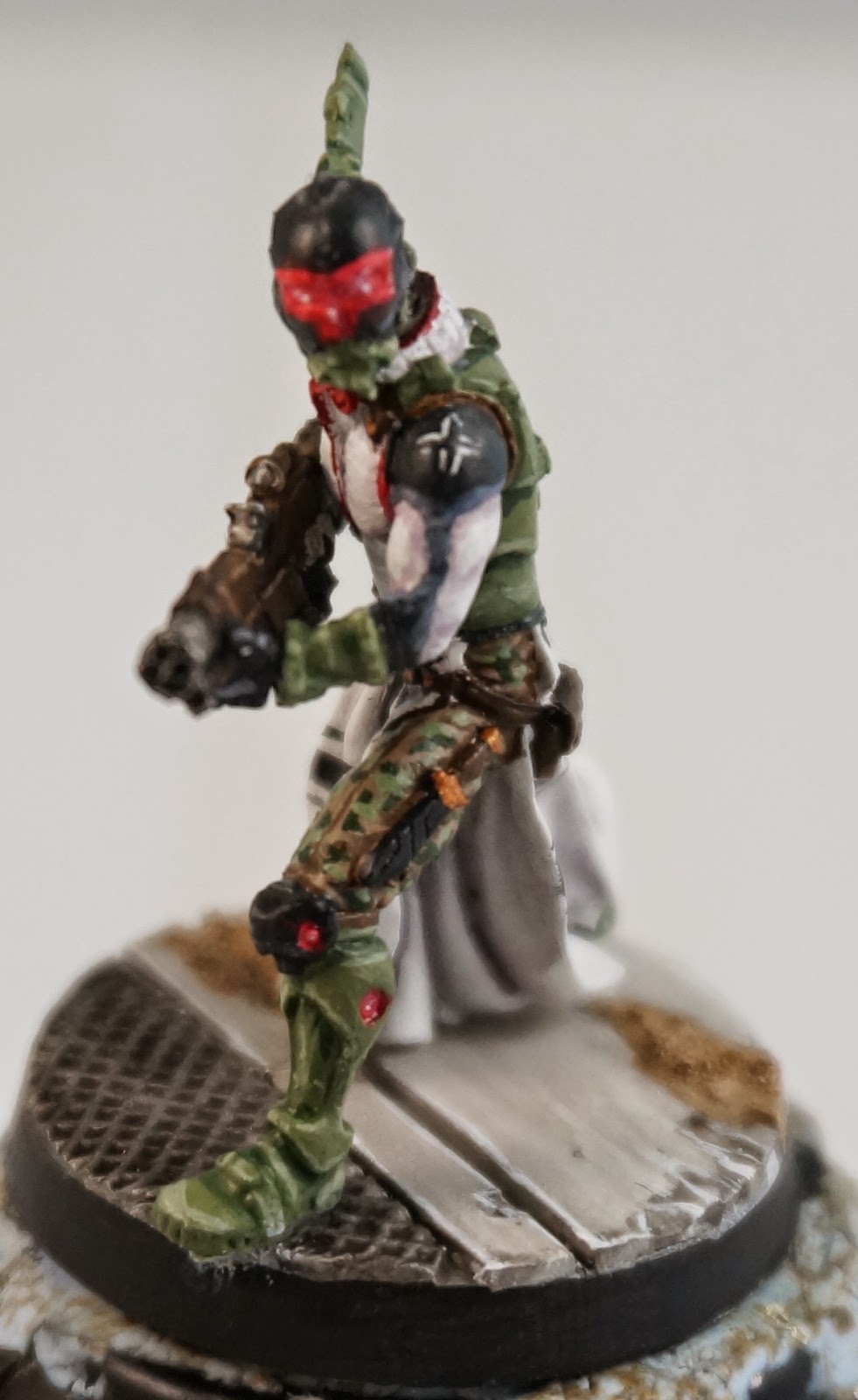 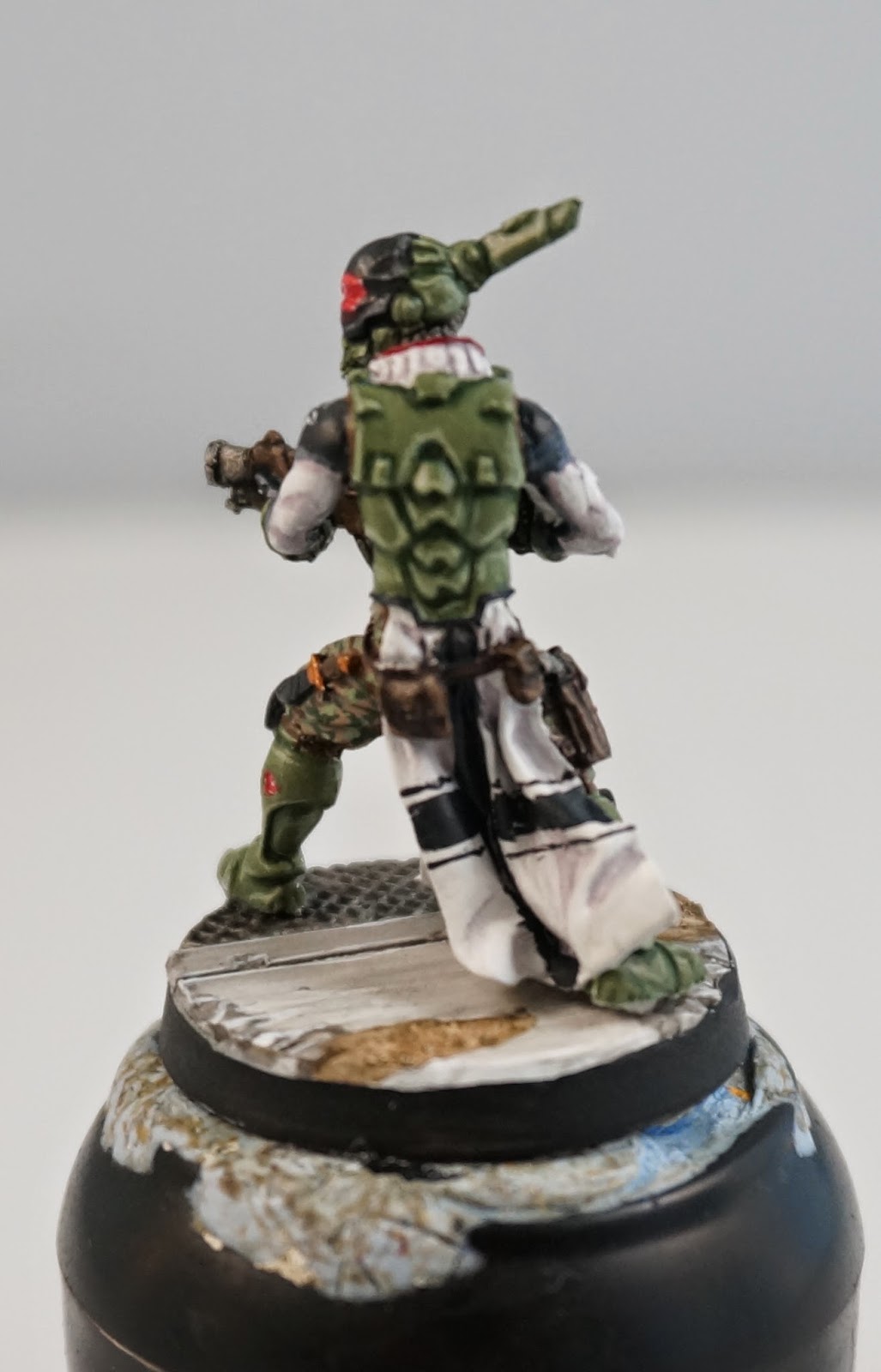 Really pleased with this guy. The next order sarge is well under way:

Add to this accidentally ordering this lot: 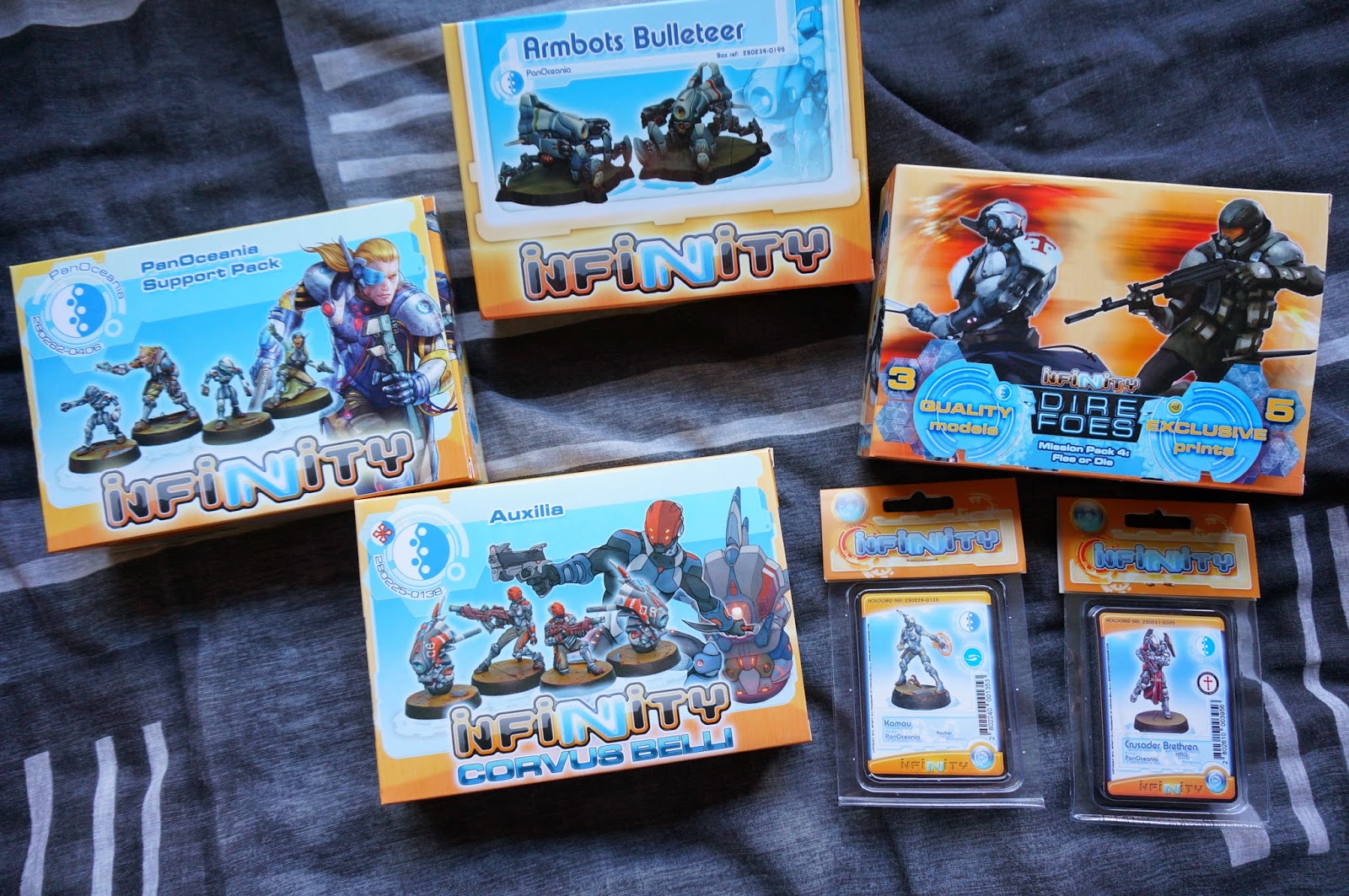 This will round out my Military orders force completely, save for waiting for them to release a Seraph so as I can have a TAG in my force.

Obviously me being me I have to do some converting somewhere and the finer detail of Infinity models will be a nice new challenge. So a lot of the models above will be being converted to fit in with my theme. Oddly enough I have a WiP conversion to show already.

This is a Female Teutonic Knight converted from one of the newly released Neo Terran Bolts, she is still heavily WiP: 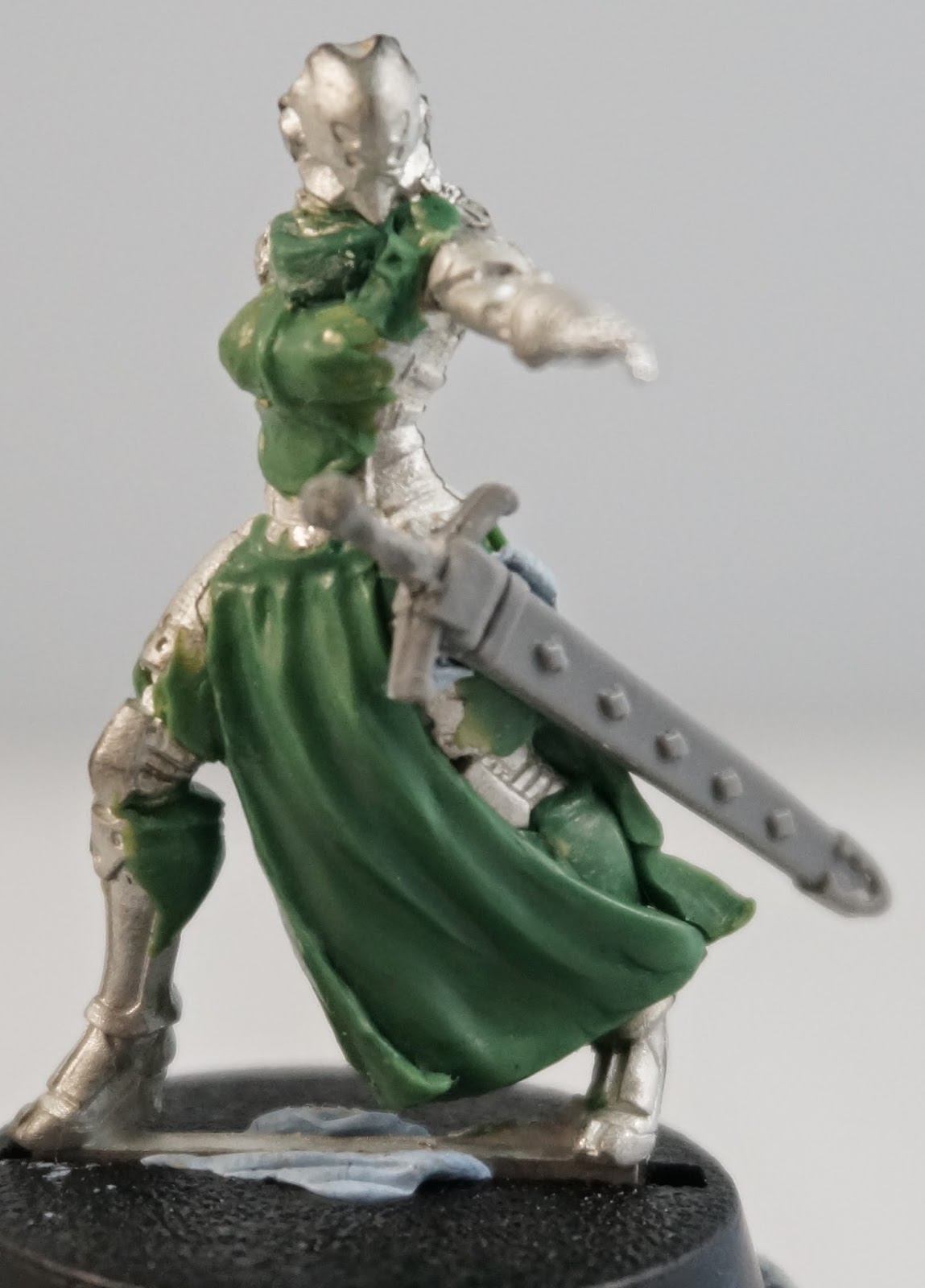 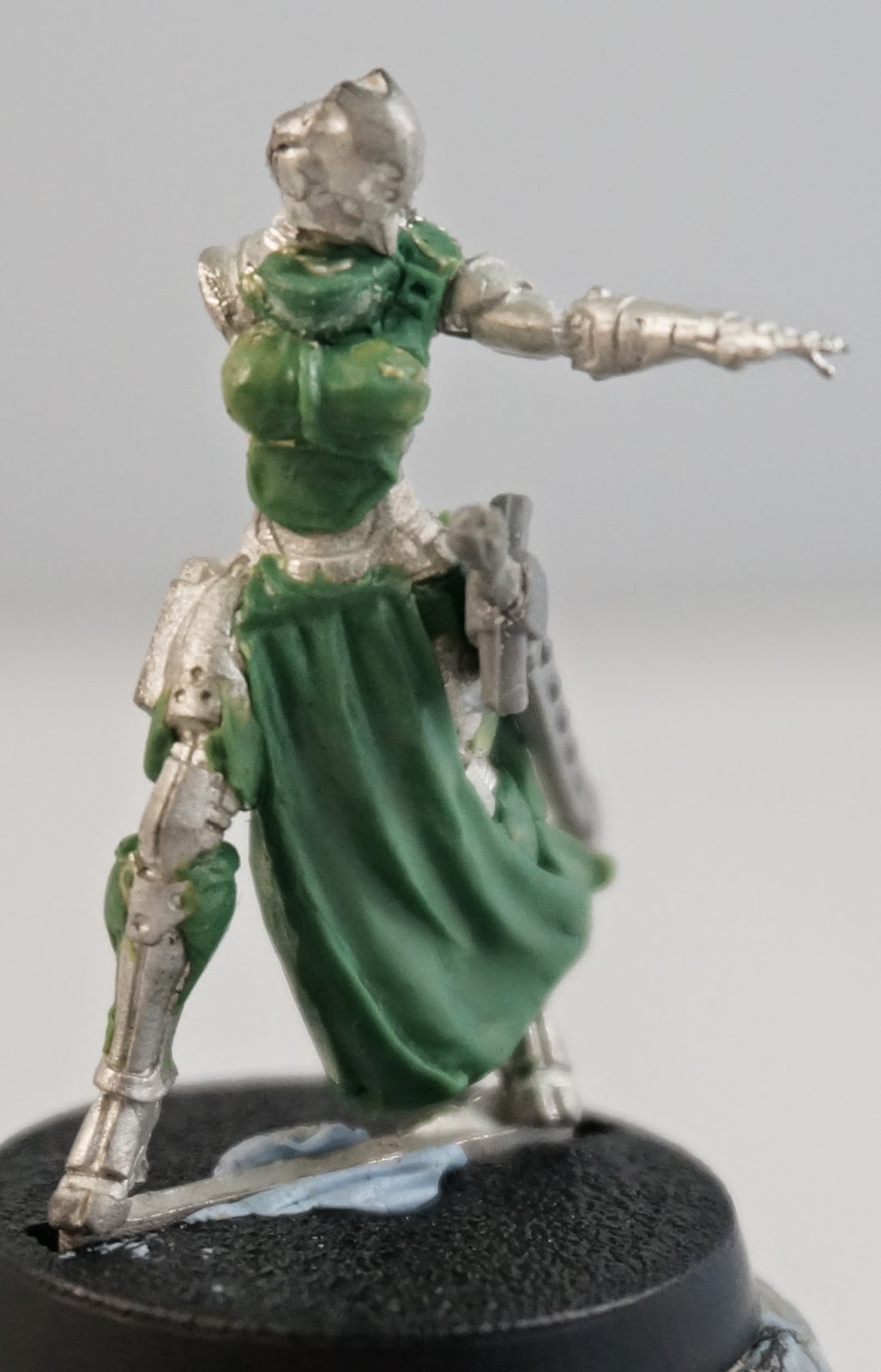 I wanted to add a 2nd Teutonic knight to the force but all the existing models are based off the same knight I already have just with different arms. So I challenged myself to convert one. Eventually she will get a converted Spit fire too.


Well that's it for now a nice big largely infinity focused update. I hope it was worth the wait. Normal service shall resume now.
Posted by Maelstrom at 16:50 4 comments

I'm back at work this week so painting time has been rather limited, however the first order sergeant for my infinity knights is approaching completion. He will likely feature in a mid week update as he is so close to being finished I might as well just wait until he is done.

This update is dedicated to the start of a pair of projects, originally I wasn't going to blog these instead presenting them when they were finished to their relevent recipients. But Nife has twisted my wrist.

After our last meet up I hit upon the idea of converting a model each for my normal Partners in crime Rictus and Nife. For nife it was decided to convert him an Eldar Autarch as given the heroic exploits of his Striking scorpion Exarch going toe to toe with a great unclean one and all manner of other beasts it seemed only fair that he/she would be promoted.

Now Nifes model will be based off the Dark Eldar character Lilith and will be quite complex, so much so I'm actually still planning just exactly how I will achieve it.

I figured I can't leave Rictus out of this as despite his constant bullying, nagging and persuading me to buy things he is generally a nice guy ;) so I tried to figure out what to make him, it hit me to make something for his daemons then I tried to think of a unit he didn't have and thus was the idea of creating him a Daemon prince born.

Here is the start of him:

Now I already have a nice name/theme picked out that being "The Morbid Saint" named after the lyrics from the below Marduk song. I figured the blowing parchment can contain lists of contagions and prayers to nurgle, and with him being skinnier than your average nurgle daemon he can represent famine or something, though this is entirely in Rictus' hands when he gets the model.

He is converted from a Necron Deciever model I had purchased a while back, given Rictus has used all manor of none Daemon models for his heralds I figured basing it off the C'Tan would follow his theme.

Now this will be the first Rictus hears of this so lets hope he likes the idea, if he doesn't well I can see the next FW open day ending up being expensive.........

Finally to finish this little update, with the spare GS from the Daemon prince I did some more work on my Truescale chaos marine for Inq28: 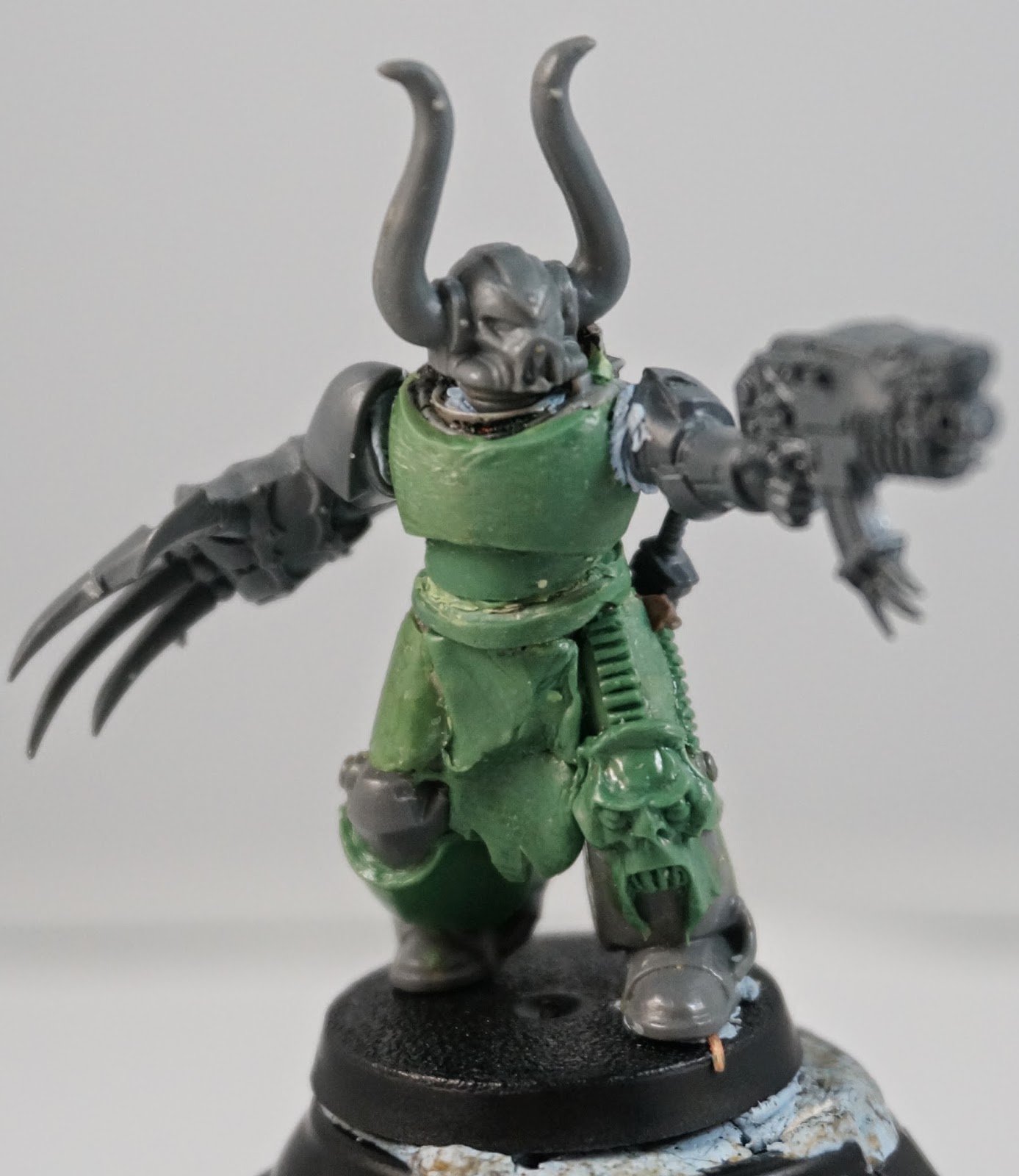 Still heavily WiP but is a nice slow burn project.


Thats it for now will be baack mid week with more painted Infinity stuff.
Posted by Maelstrom at 18:14 1 comments

Well I've kept my promise (That'll teach you Sheep ;) ), here is the first of what I hope will be weekly posts on what I have been up to hobby wise.

This week its focusing on some stuff I have had sitting around for a while but have been too scared to attempt to paint incase I ruined such nice models. That being Infinity more specifically the Pan Oceania Military Orders starter set.

Now I also have a Yu Jing set too and I will get around to them soon hopefully. For now I was struck by an itch to paint something the other day and dropped on the box. I decided screw it might as well attempt to paint them so here are my WIP results thus far: 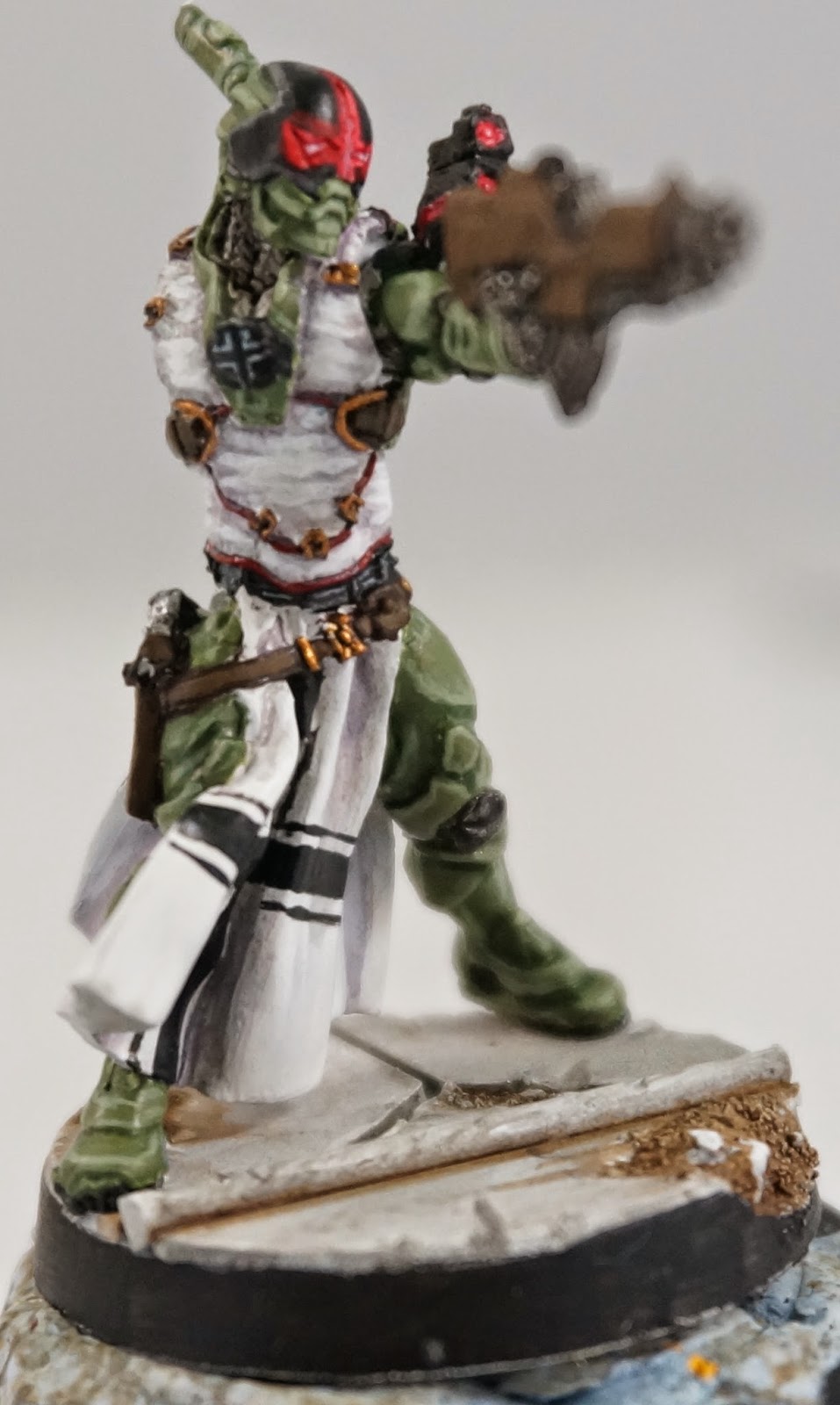 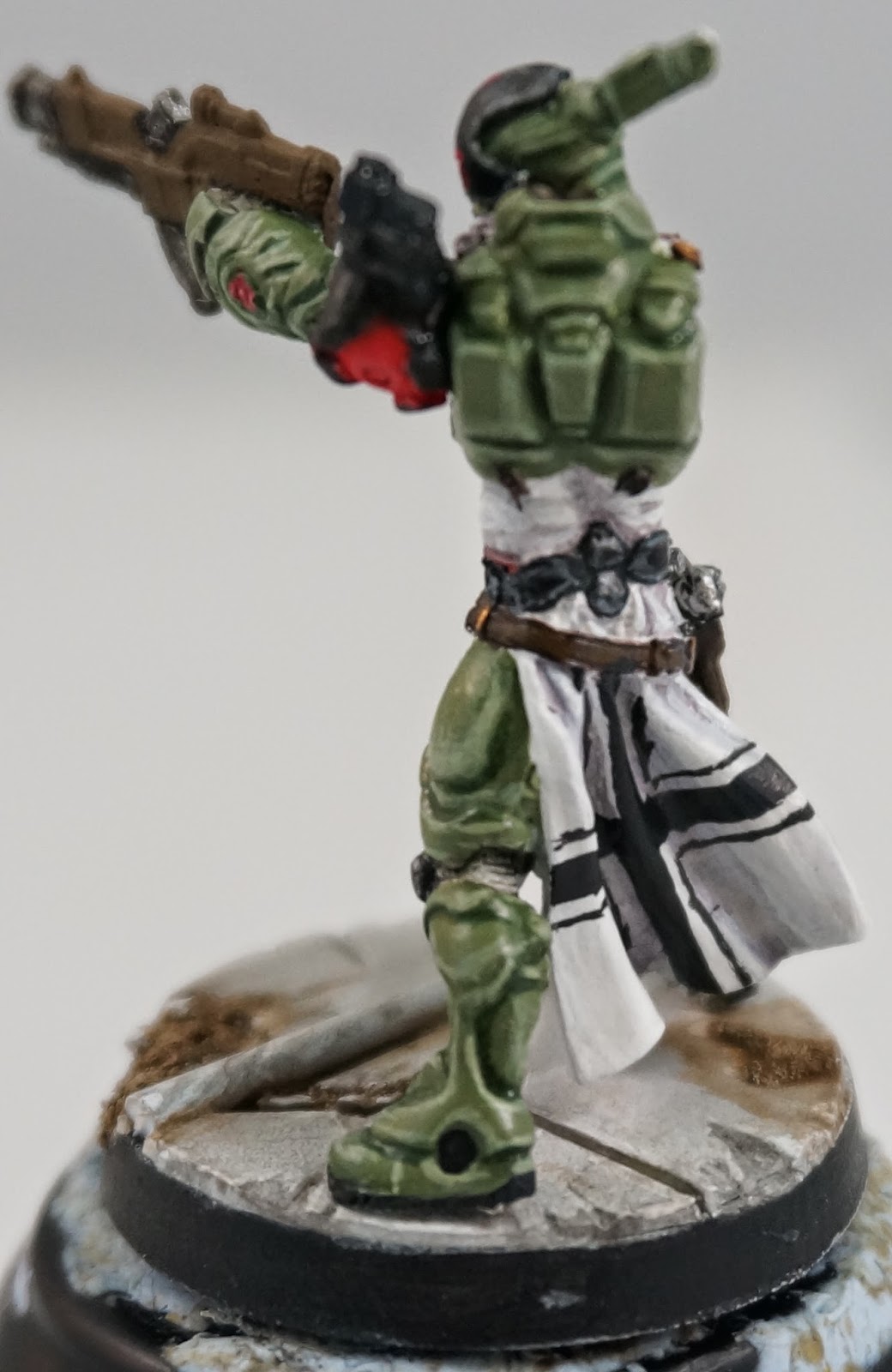 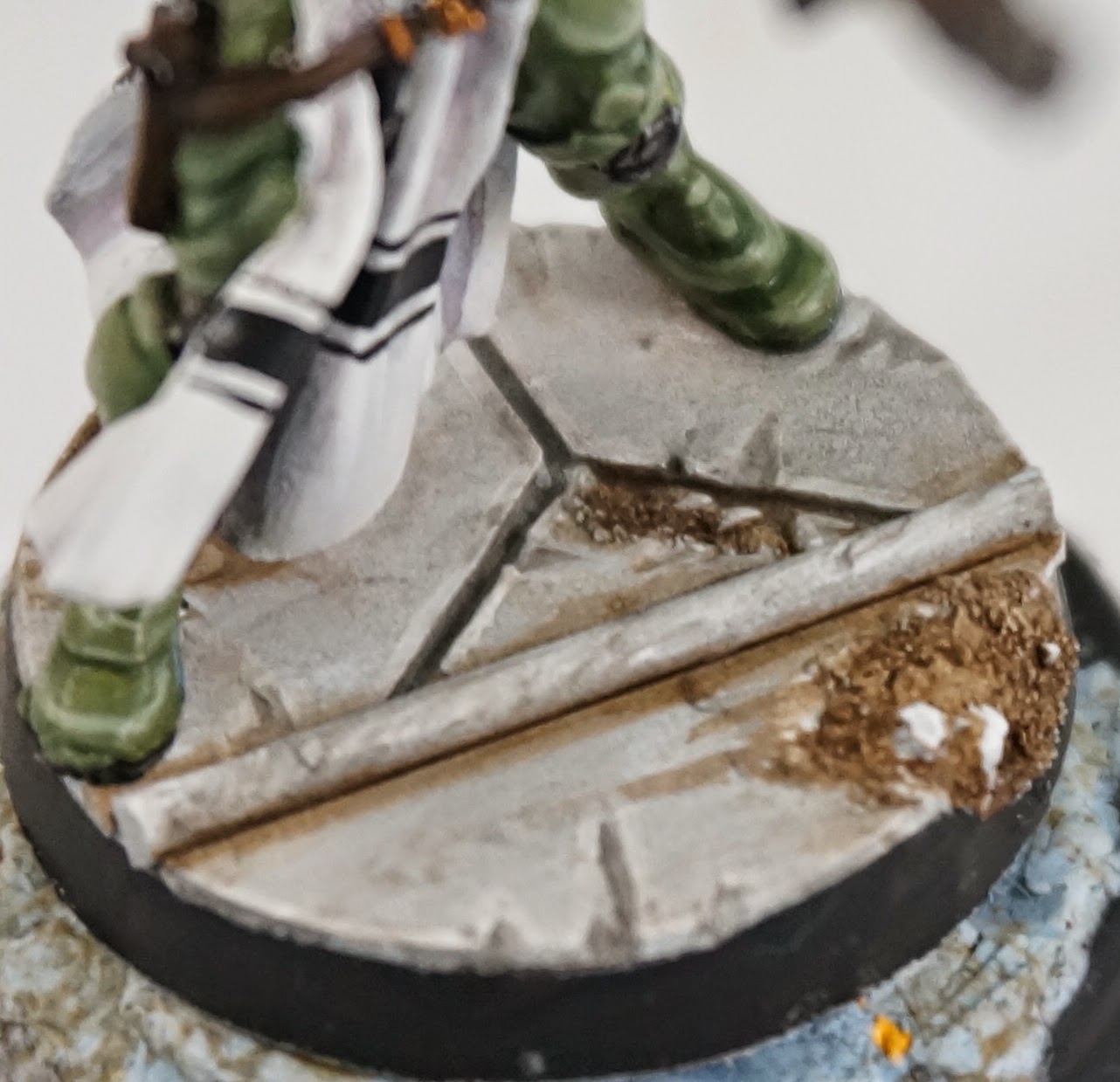 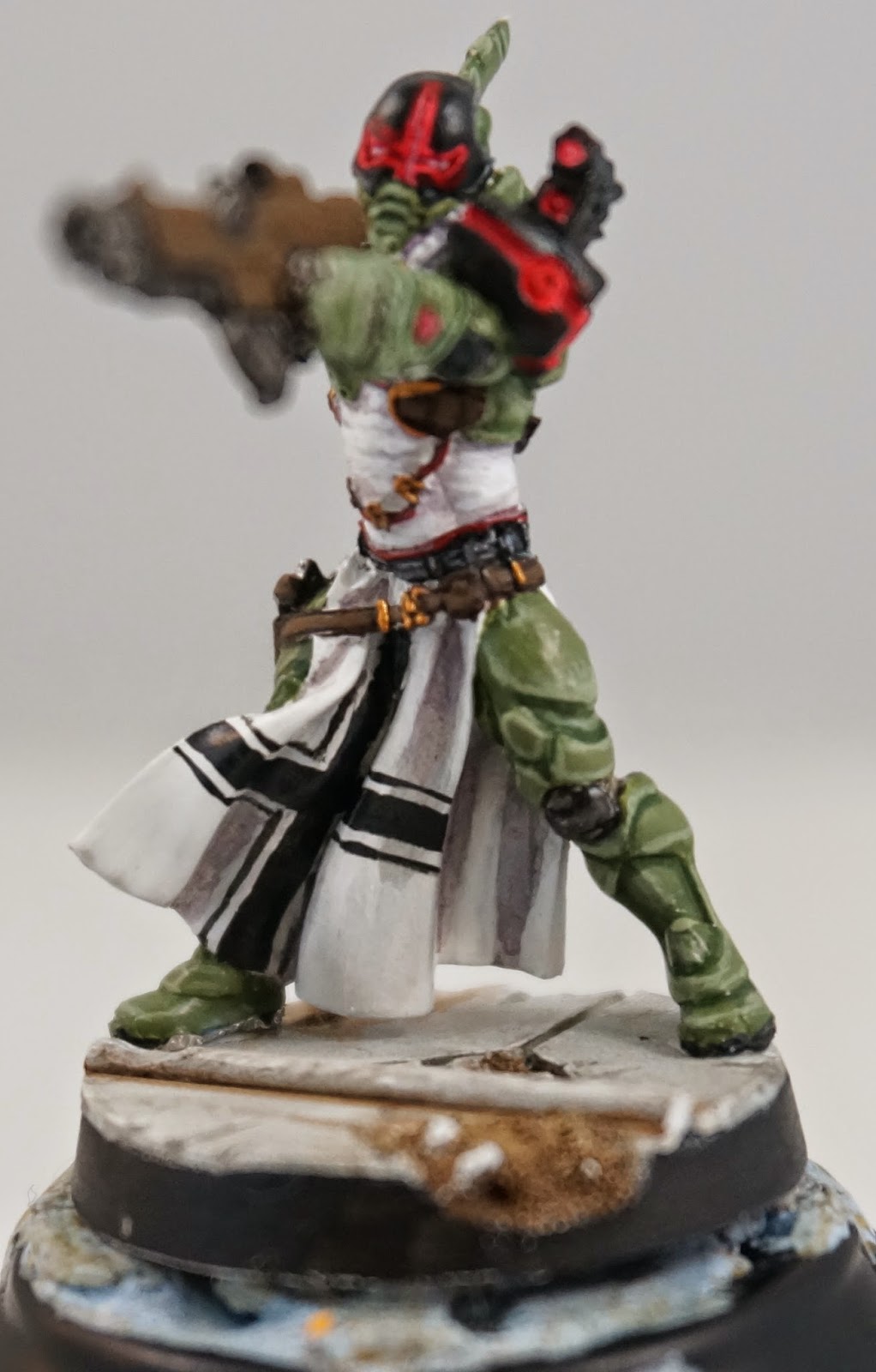 This guy is nearing completion. I wanted to try something different to the blue armour that the models on the box had so opted fro green. He has been an experiment as its one of the first models I have actually painted over a white basecoat.

I'm actually pretty pleased with the freehand and armour. I still need to darken his base down further so as it doesn't blend in with his tabard too much. A big thanks to that fiendish Dane Rasmus for that suggestion on skype. 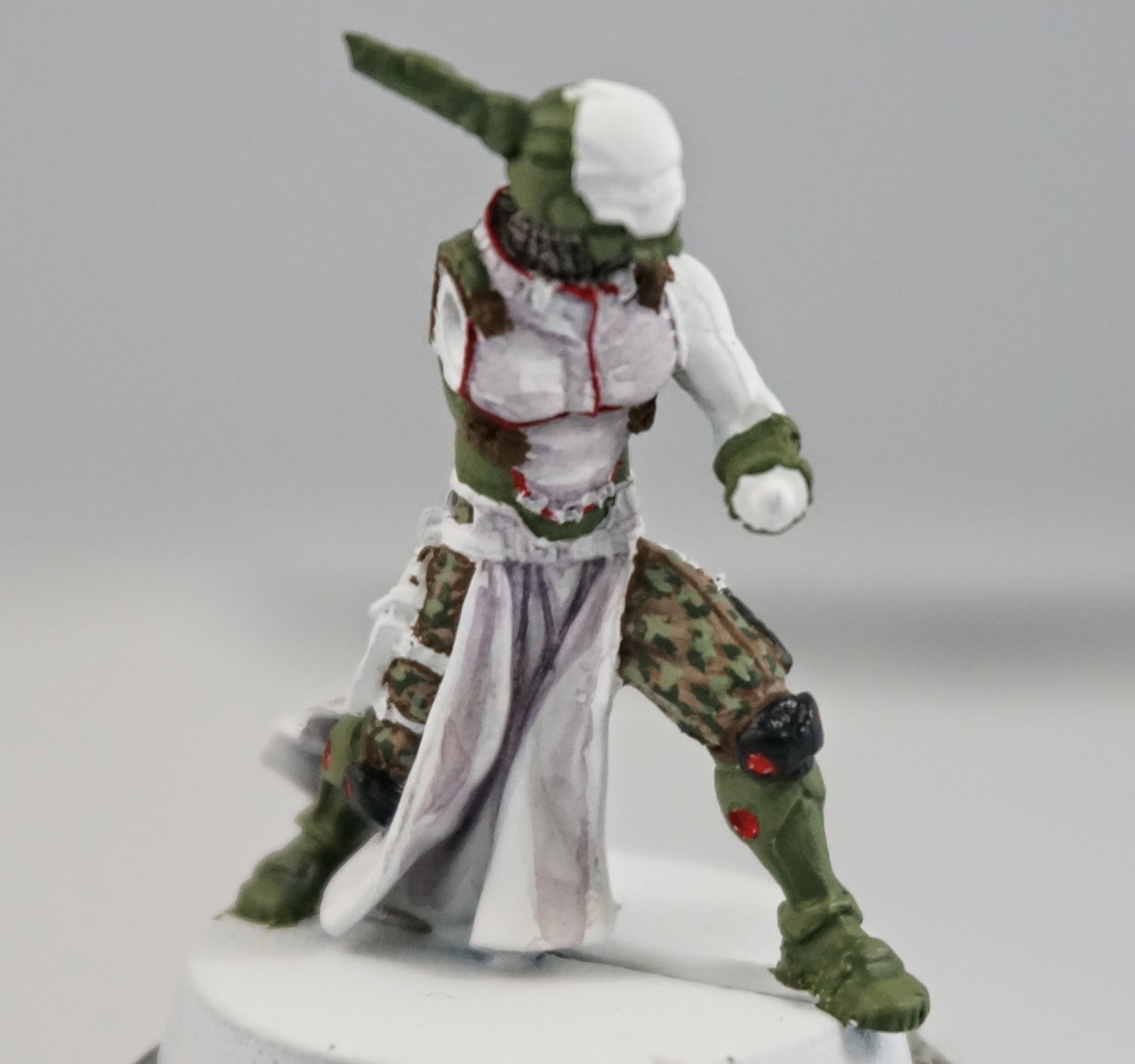 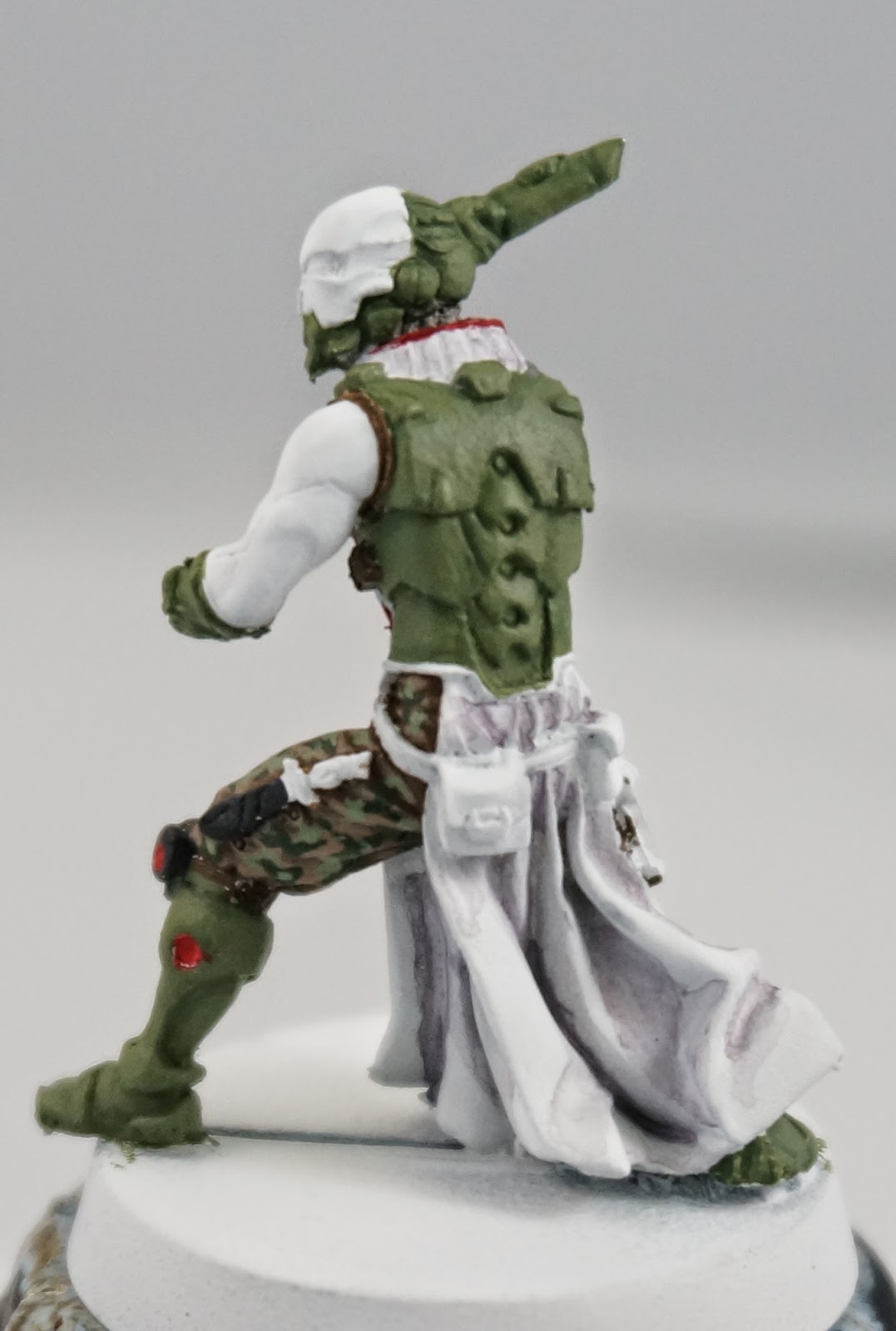 There are 4 of these guys in the box so this one has been the test bed for my scheme for them. I have opted to attempt poorly may I add digital camo on his fatigues. This again is to give a bit more realism to him (as real as space knights in power armour can be) he is farm more heavily WiP than the teutonic knight but hopefully you will get an idea of the scheme.


I have been really enjoying painting these guys, so much so I ordered a few bits to go with em, one of which will mark my first attempt at converting an infinity model, wish me luck haha.

As ever let me kno wwhat you think :)
Posted by Maelstrom at 15:20 2 comments