Its update time again, and as normal for me I've got distracted from painting the celestial guard and Knight of Santiago. Instead I've been working on a Hsien: 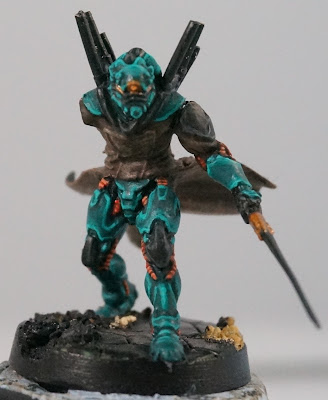 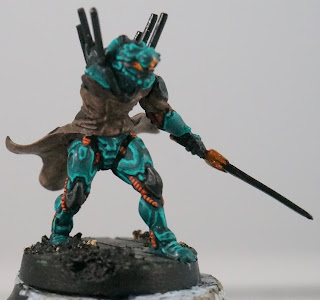 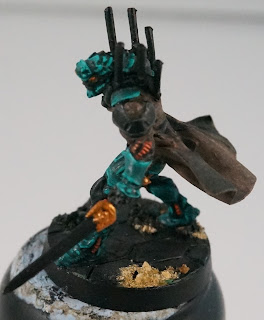 I started this guy to see how the colour scheme would work on a heavy Infantry model. So far I think it works rather well.

I've also tried one of the techniques from the Giraldez painting book. This being the one for creating a leather effect: 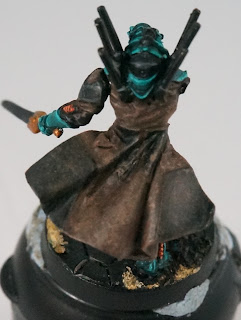 Again I'm reasonably happy with the effect, though might still need a little more work.

I've also stripped all the other Yu Jing models I had painted a few years back:

Hope to get these guys painted up over the coming weeks :)

Its update time again. This week I have rotated back around to working on infinity, its actually the first time I've properly st down and worked on some infinity bits for a good few months.

I have 2 models to show though they are both still work in progress, first up is a Knight of Santiago: 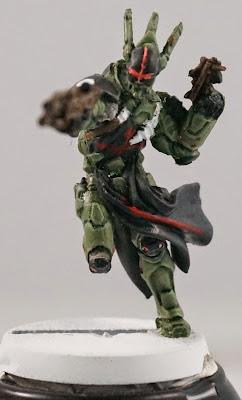 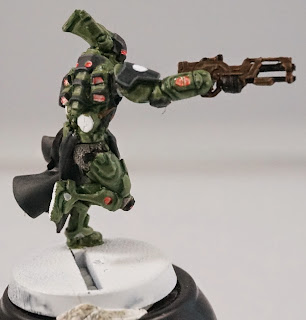 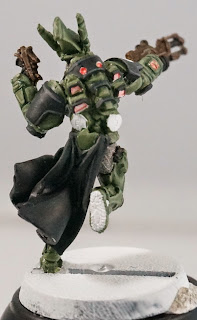 This has been a joy to paint, though I had quite forgotten how fine the details are on the model. Still some way to go on him yet but give me a few evenings and he will be done.

Next up is a model that I've had for a long time. Back when I used to frequent the AmmoBunker forum Rasmus talked me into getting some infinity stuff to paint,I opted for the Yu Jing Imperial service sectorial starter box,

I didn't get too far with them due to being intimidated by the smaller scale, fast forward to the past few years where I got back into infinity all my effort poured into my Teutonic Knights. However this past week I dusted off a Celestial Guard and set about a test scheme: 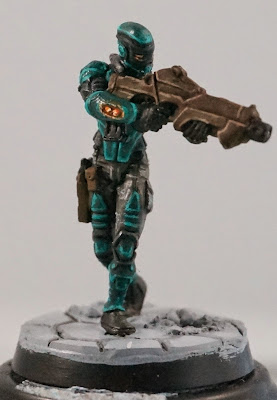 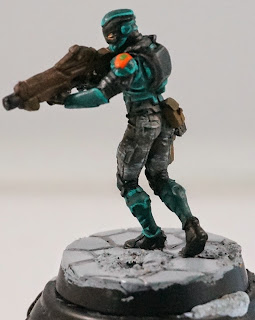 Still a way to go on this guy and you can see the sculpt showing its age with the rather large gun. I've tried to go for a very dark and sinister scheme on them given they are basically secret police, so its a very dark jade green building up to the edge highlights.

Here he is compared to the original scheme I painted what must be 4 or more years back: 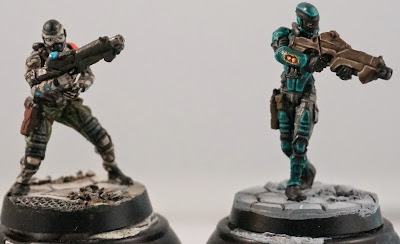 Quite an improvement to my eyes, the old scheme was too busy and the paint too lumpy. Needless to say he will be being stripped and repainted in the newer scheme.

Anyway thats it for now, I'll be back next week with these pair hopefully finished and possibly a few more bits to show :)
Posted by Maelstrom at 16:51 4 comments 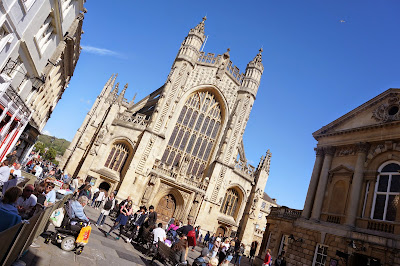 I've been working away on more Mars Attacks stuff and have pretty much finished 5 martian marines:

These have been rather fun to work on, infact rather relaxing to paint given they are simple models. No getting bogged down on them.

These are a fair bit more time consuming than the martians as they do have a lot more going on with each model, They are still rather fun to paint.

As it stands thats around 50% of the core mars attacks box painted, I've made more progress on a bunch of other bits from it but nothing really worth of posting.

And as a final shout out, Mr Feral has returned to the world of blogging and set up a new blog:

He's currently working on a variety of bits such as chaos corrupted skitarii, so go take a look :)


Well thats it for now, next week may see some zombies, infinity and possibly some more martians
Posted by Maelstrom at 17:26 4 comments

been quiet the past couple of weeks, I've actually been getting the odd few games in.

The other weekend I took Star Wars Armada over to Rictus' house for a spin, must say I'm really impressed with it. It plays quite quickly once you have the basics down.

Last weekend I journeyed South and headed to Southampton and the Isle of Wight for a few days. I dropped in on Mr Feral and stayed on the Island with Nife for a few days. Nife being weak willed as ever decided to pick up the Assassinorum Execution Force boxed game: 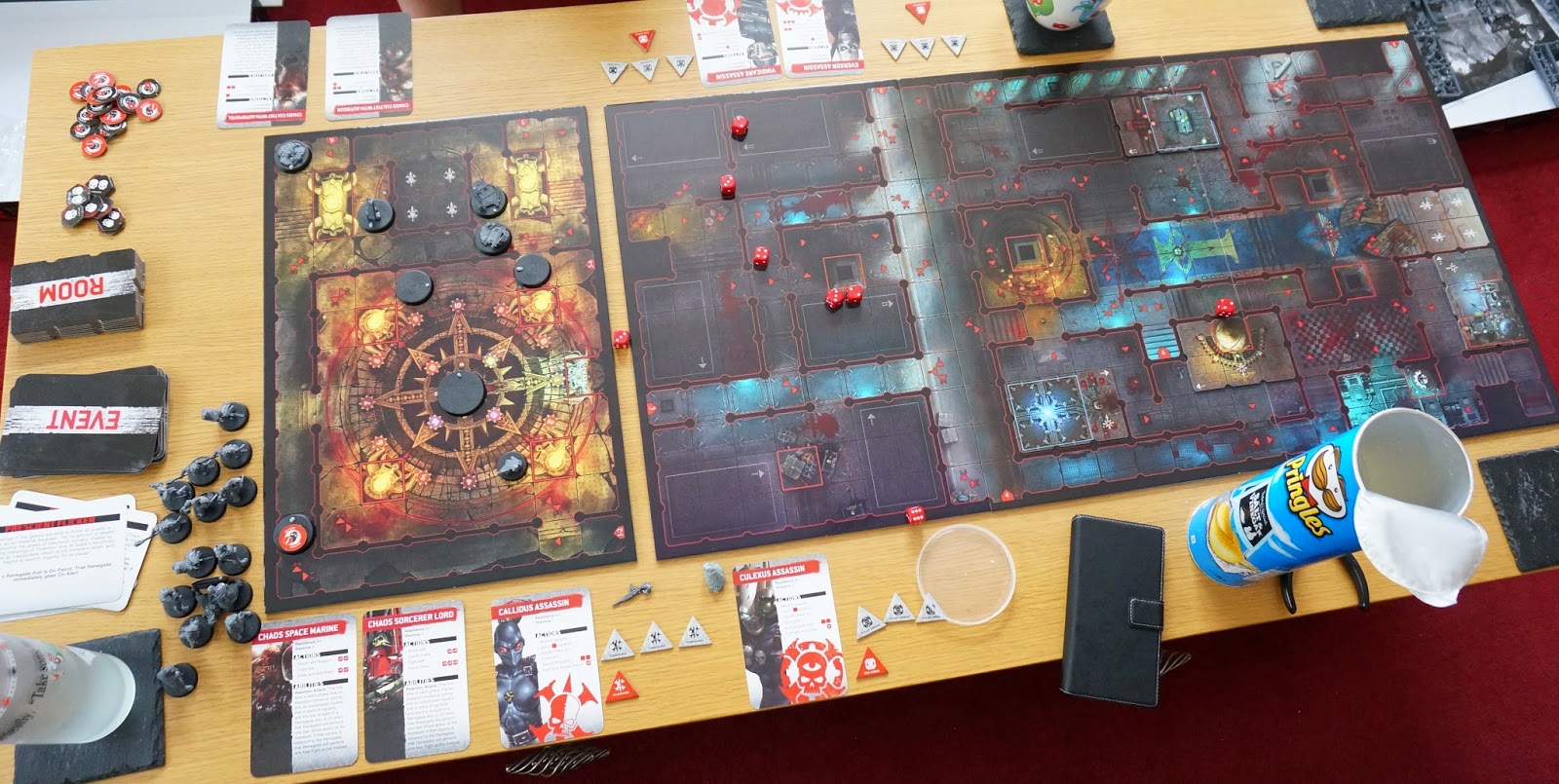 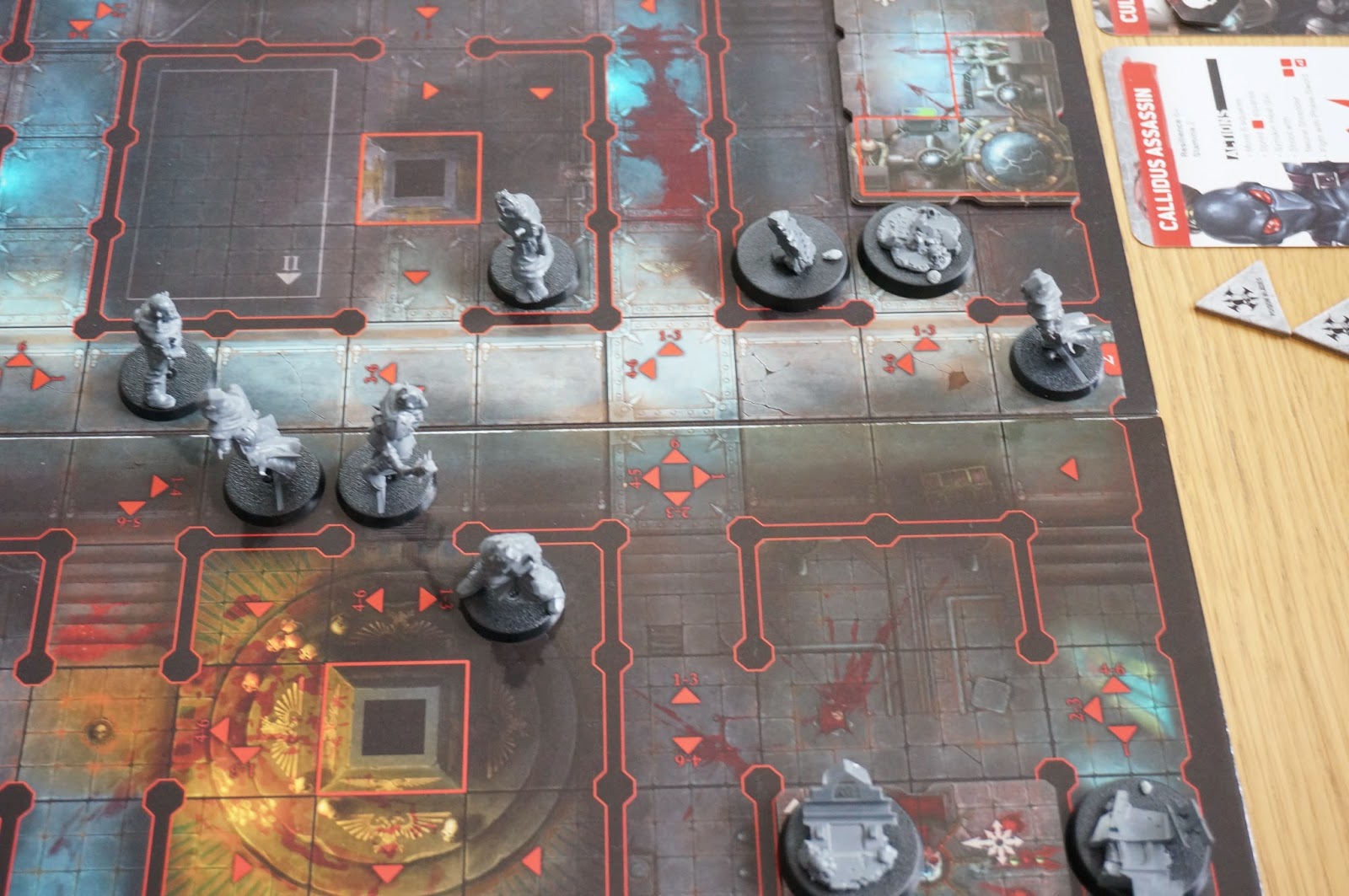 We had to use bases to represent the assassins and chaos marines. I must admit I came to the game not expecting much other than an excuse to keep the assassin models exclusive for a while. However I left impressed, its quite a fun little board game. Quite tactical and got a good random element to it, we managed to get 2 games in over the weekend and intend to roll it out as a quick game at most proper meet ups.

We also tried out the latest Zombicide game, season 3: 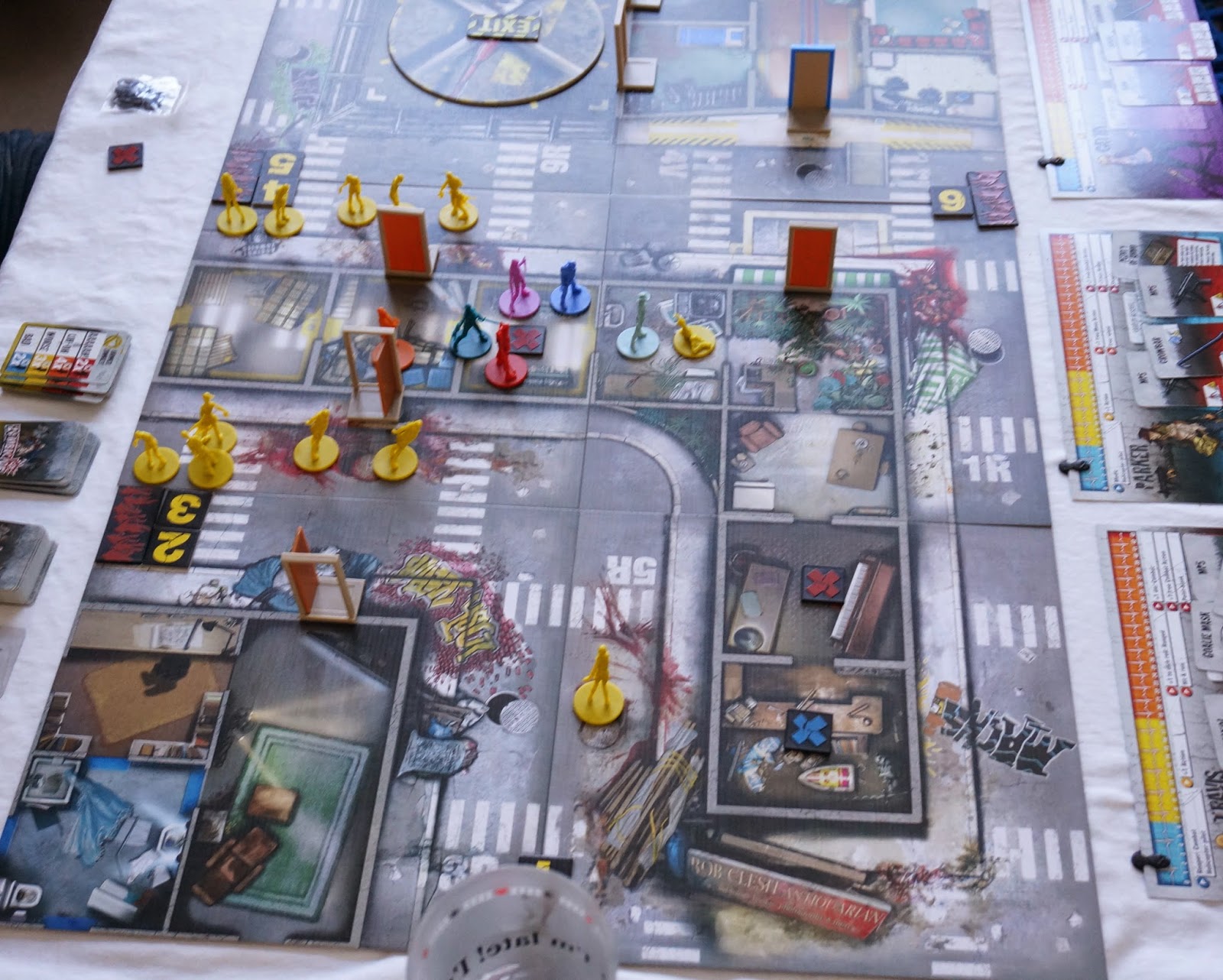 This was the first time facing the new skinner zombies, which proved to be quite nasty especially against weapons that roll large numbers of dice.

Right so onto some models for this update, inspired by the game play I have decided to put together a set for Assassinorum Execution force. However given I really don't need the chaos models and am not fussed on owning the assassins I have taken the cheaper route.

Thanks to the eBay scalpers I have managed to pick up all the game tiles, rules, cards, dice and tokens for £12 with postage. And I have set to work organizing the mass of chaos bits I already had lying around into the enemies for the game:

Given I only need 3 standard chaos marines for the game I decided to once more tread upon the truescale path. The one on the right is a marine I started converting for INQ28 ages ago, the other 2 are experiments of splicing termie legs and DV chosen. A huge amount of work is needed on them but it should be worth it. They can always be used in inq28 too.

In other news I have been playing around with trying to get a simple but effective camo scheme for my american  marines for Mars Attacks:

They are still WiP but I think I have managed to capture the effect without spending an age on each one doing camo, what do you guys think?

Next update will likely be on Monday as I'm away over the weekend :)