Been a fair while since I last updated, to finish off what has been an already shite year I lost my Nan towards the end of November.

I haven't been much in the mood or mindset for the hobby since then combine that with the joy of working in retail at christmas time and my free time has taken a heavy blow.

I'm coming more around to wanting to return to working on some bits now the fact I got the 3rd edition Infinity Rule book plus the Deadzone zombie expansion bundle for christmas is giving me a bit of a kick of motivation.

Another thing that has given me a kick and is also the point of this post is the altogether awesome Christmas present I was sent by none other than my foul Danish Friend Rasmus ( he has recently started a blog so please go and check it out: paintandprocrastination). This year we agreed on exchanging gifts with me sending him an assortment of models plus some gaming mats.

In a cunningly thought our parcel box came the below all laid out on a deadzone mat: 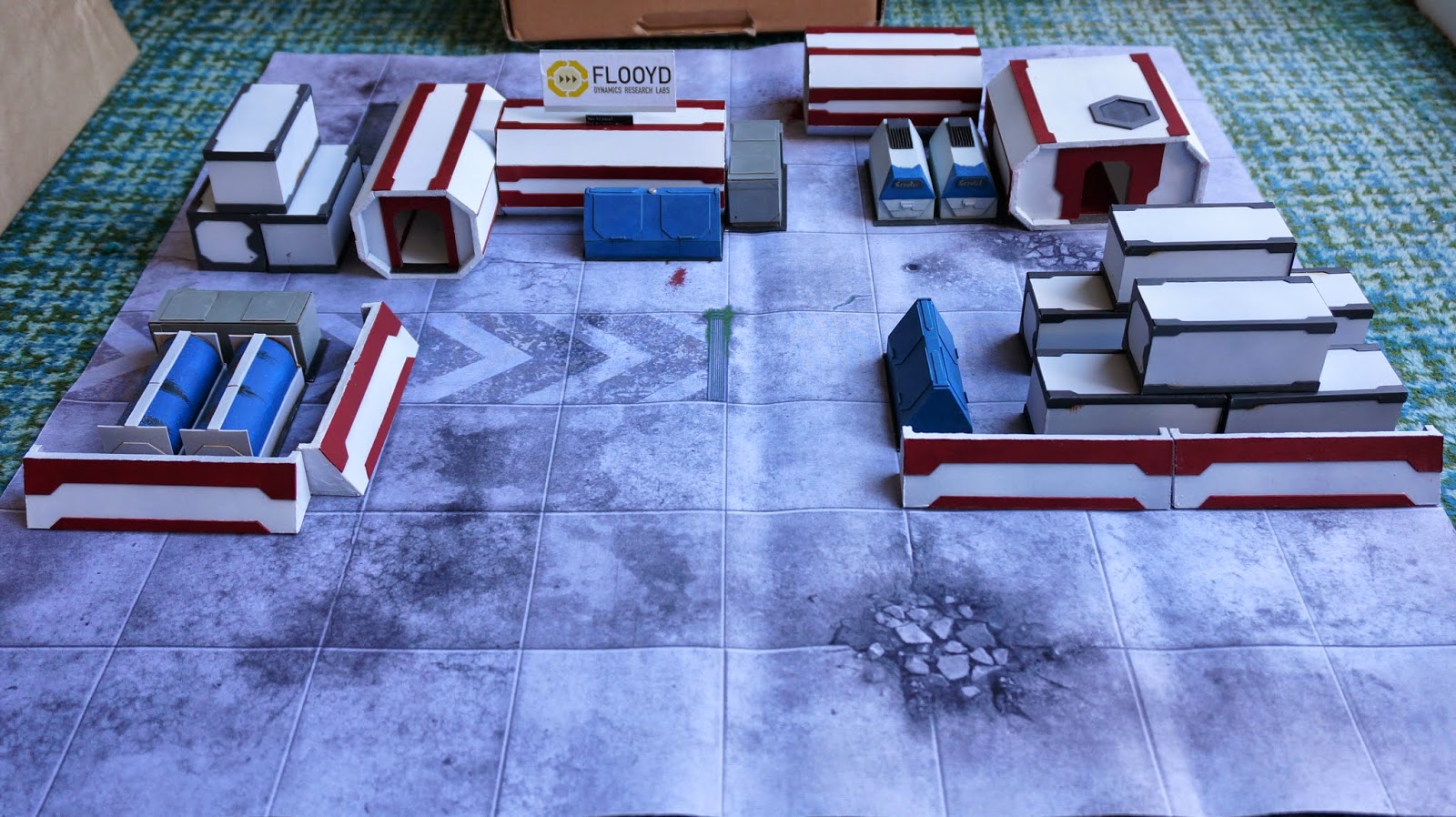 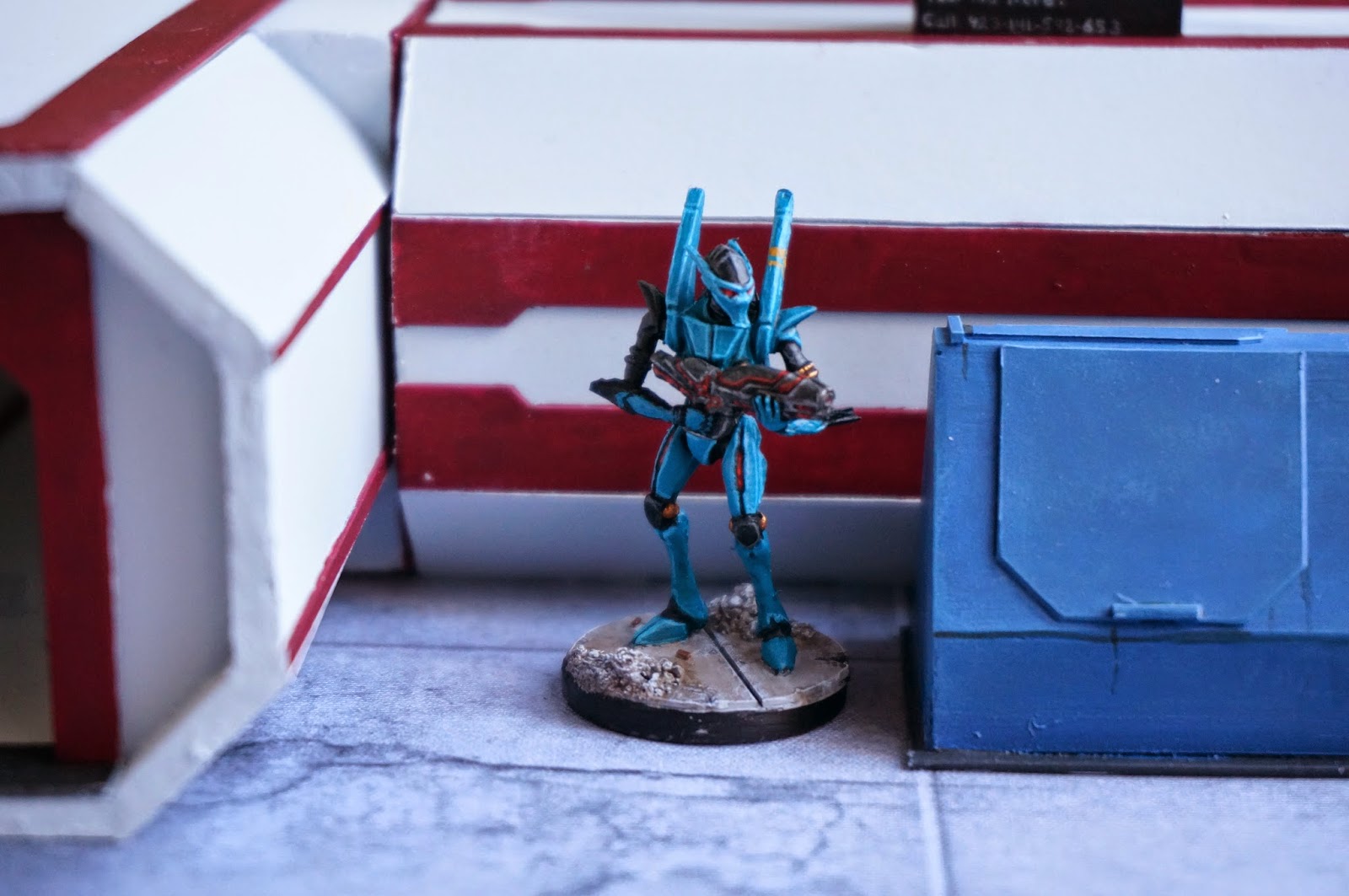 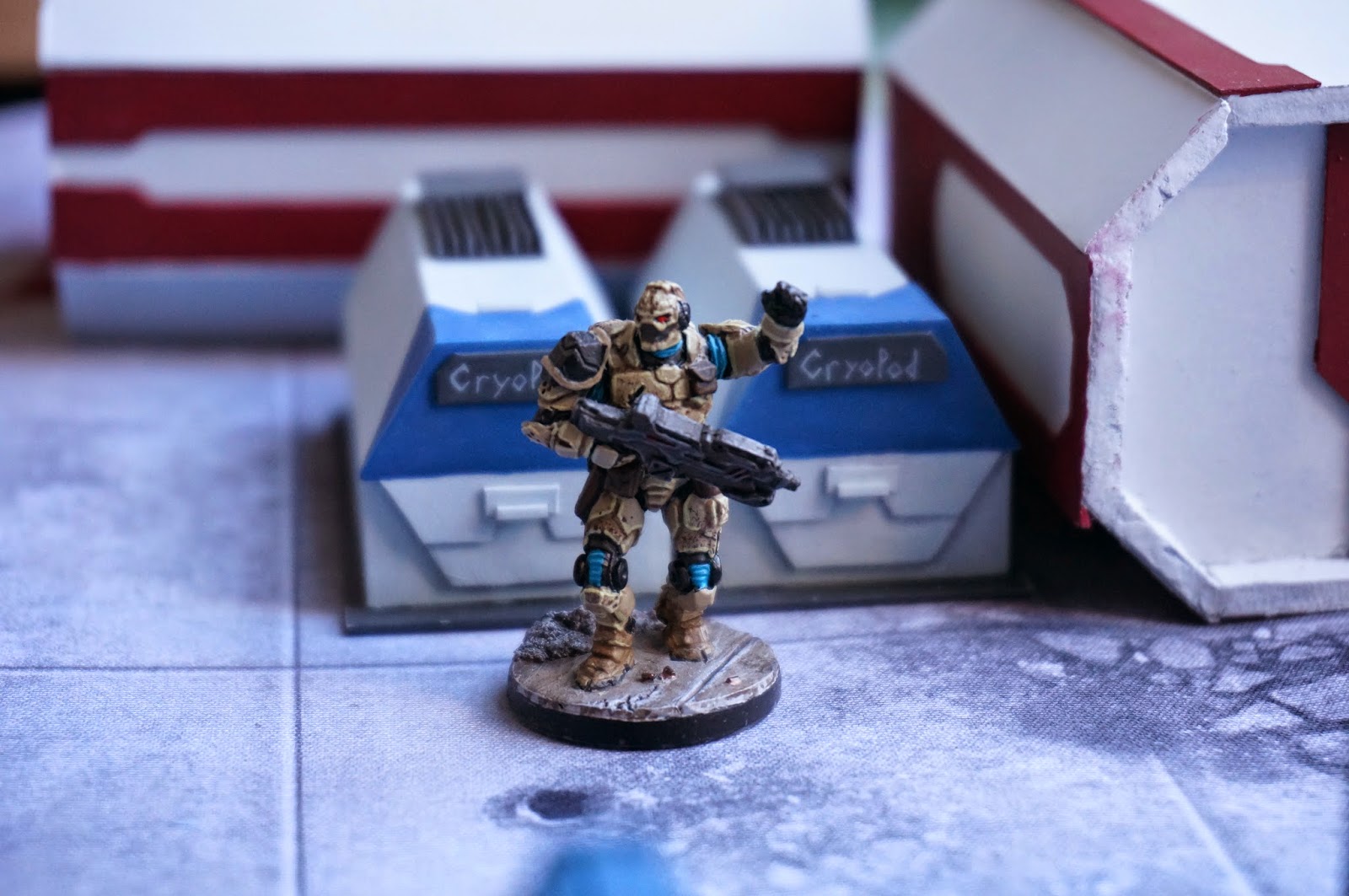 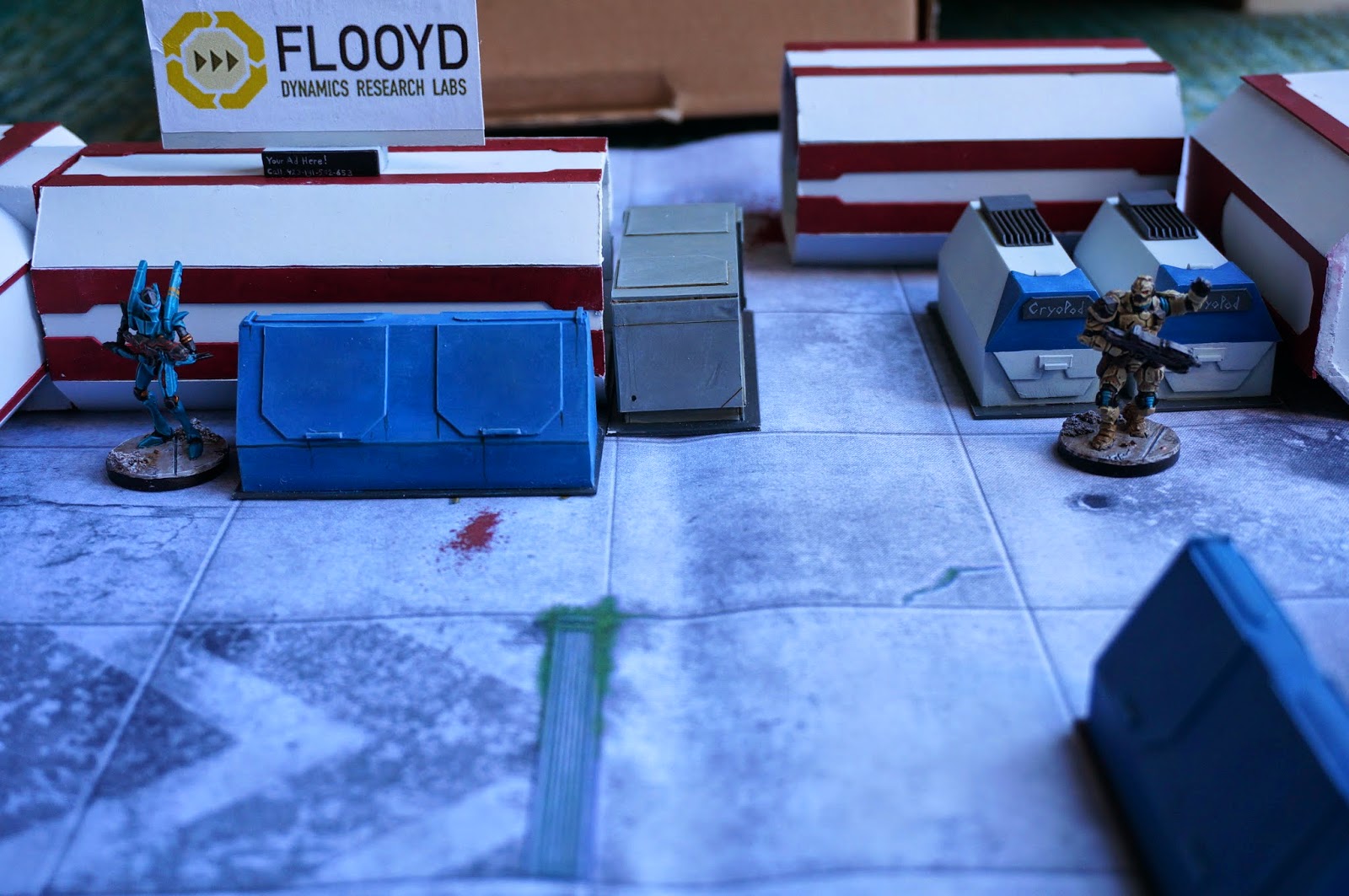 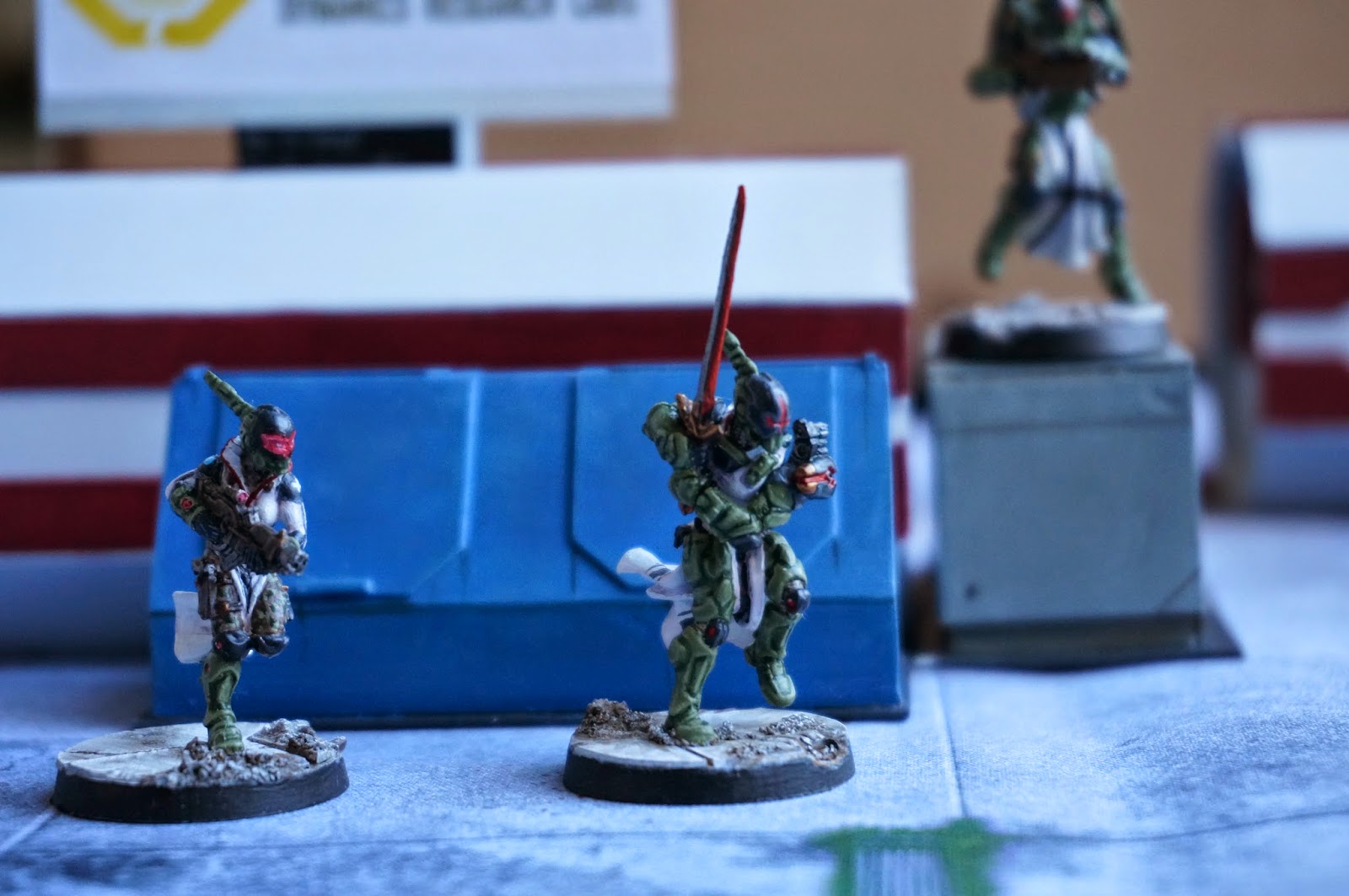 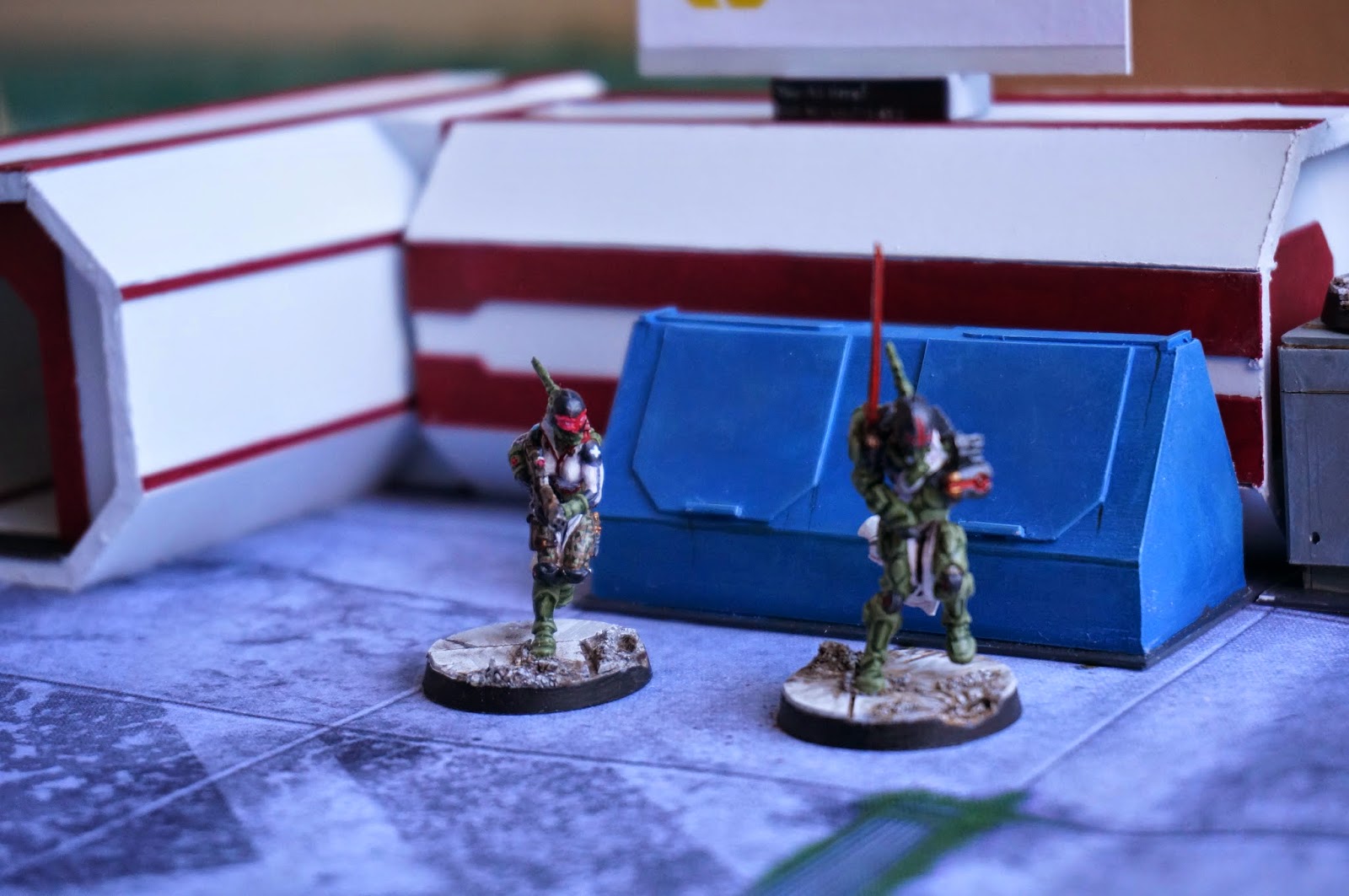 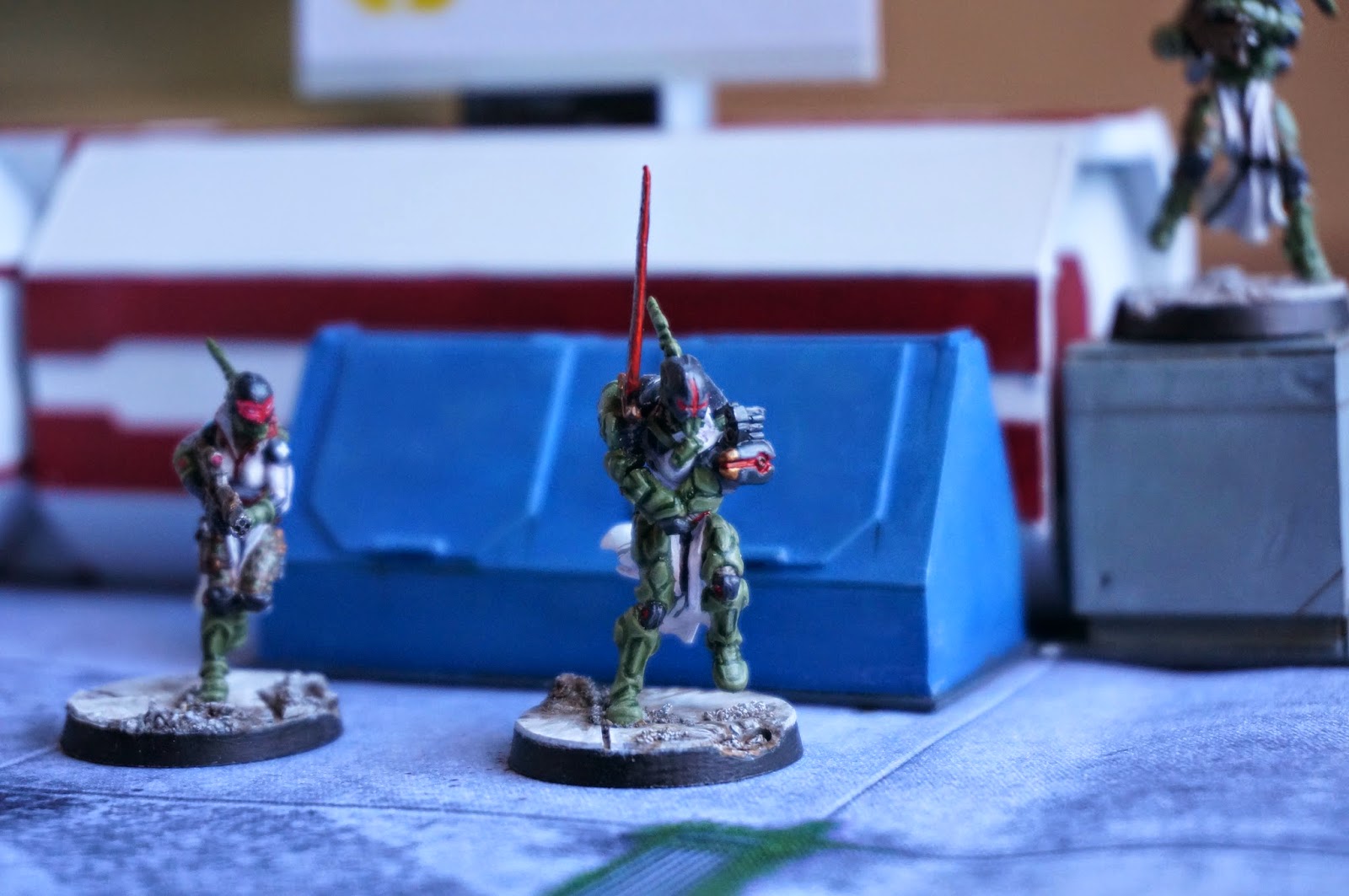 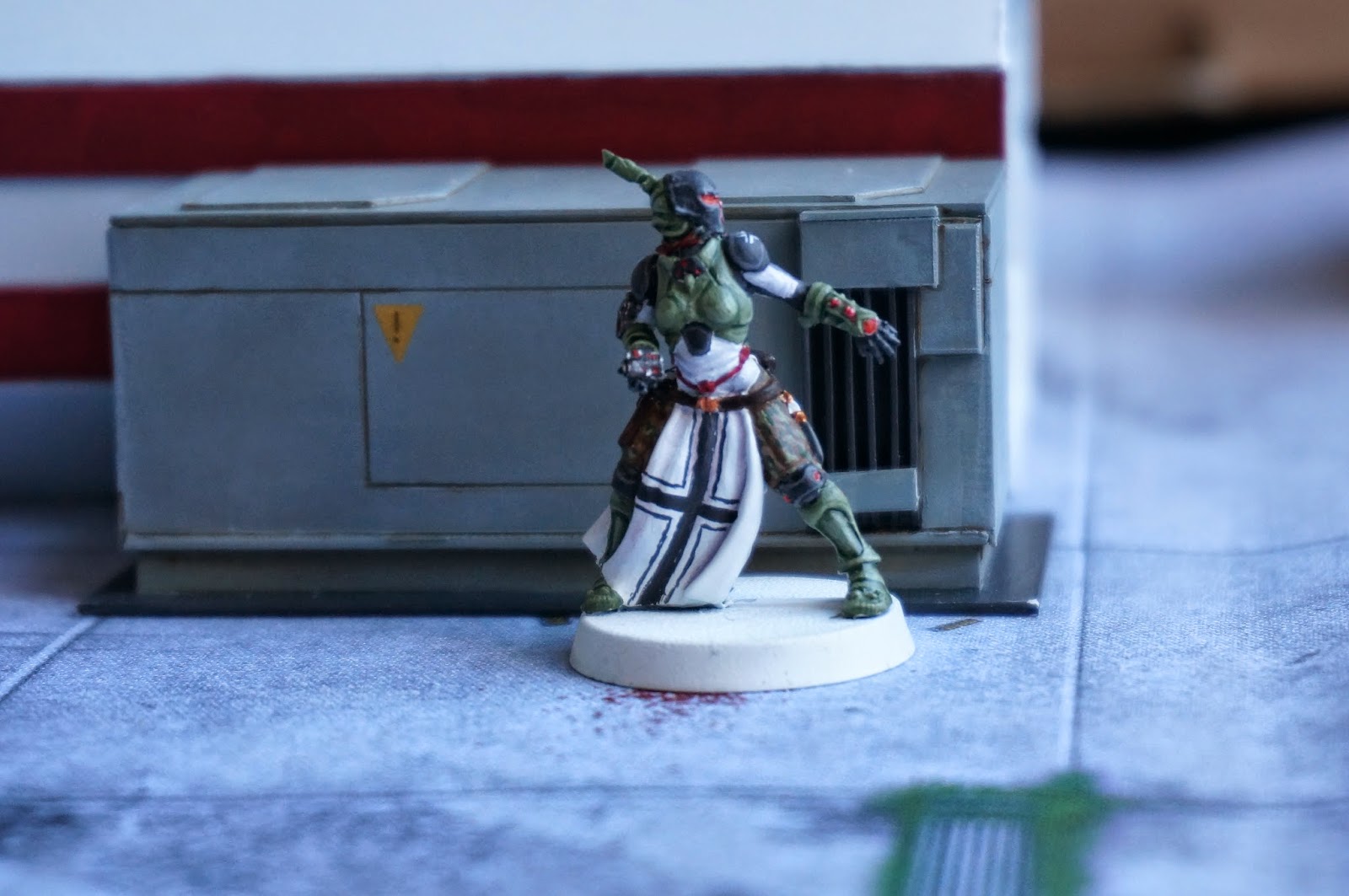 Thats right he scratch built me an entire batch of Infinity terrain based off some he had already made for himself. My jaw hit the floor when I opened it, if I combine this with the stuff I already have scratch built plus my horde of deadzone terrain I think I happily have enough for a 4'x4' table.

To top it off he also sent me 2 knights of saint diago which are currently being built.


I hope to get back into the swing of posting come the new year, so I shall sign off now on the terrible year 2014 has been for me in real life and hope that 2015 brings something positive.

All the best to all of you who manage to read my babble and have a happy new year
Posted by Maelstrom at 16:18 2 comments

We Come in peace

Its been quiet in here the past Month, I haven't been up to much hobbywise in that time short of trying to get some Tau bits done in time for the Meet up(which happened last week)

Speaking of the meet up a great time was had by all, highlights included:

The Tau didn't fair well at all this meet up, often failing moral checks and running or in the case of the commander and entourage deep striking in killing 4 dire avengers then all getting nuked by fire dragons. bad luck and dice rolls are to blame, I'll have revenge next time......

Whilst I was away however a box of goodies arrived, 1 year after I backed it my Mars attacks stuff is here. Much like a child at christmas I spent an afternoon going through the contents of the box.

I must say Mantic get better and better. Considering the models are primarily board game pieces and not true wargaming models the quality on them is fantastic. I have of course had to paint up a batch of martians, result are below: 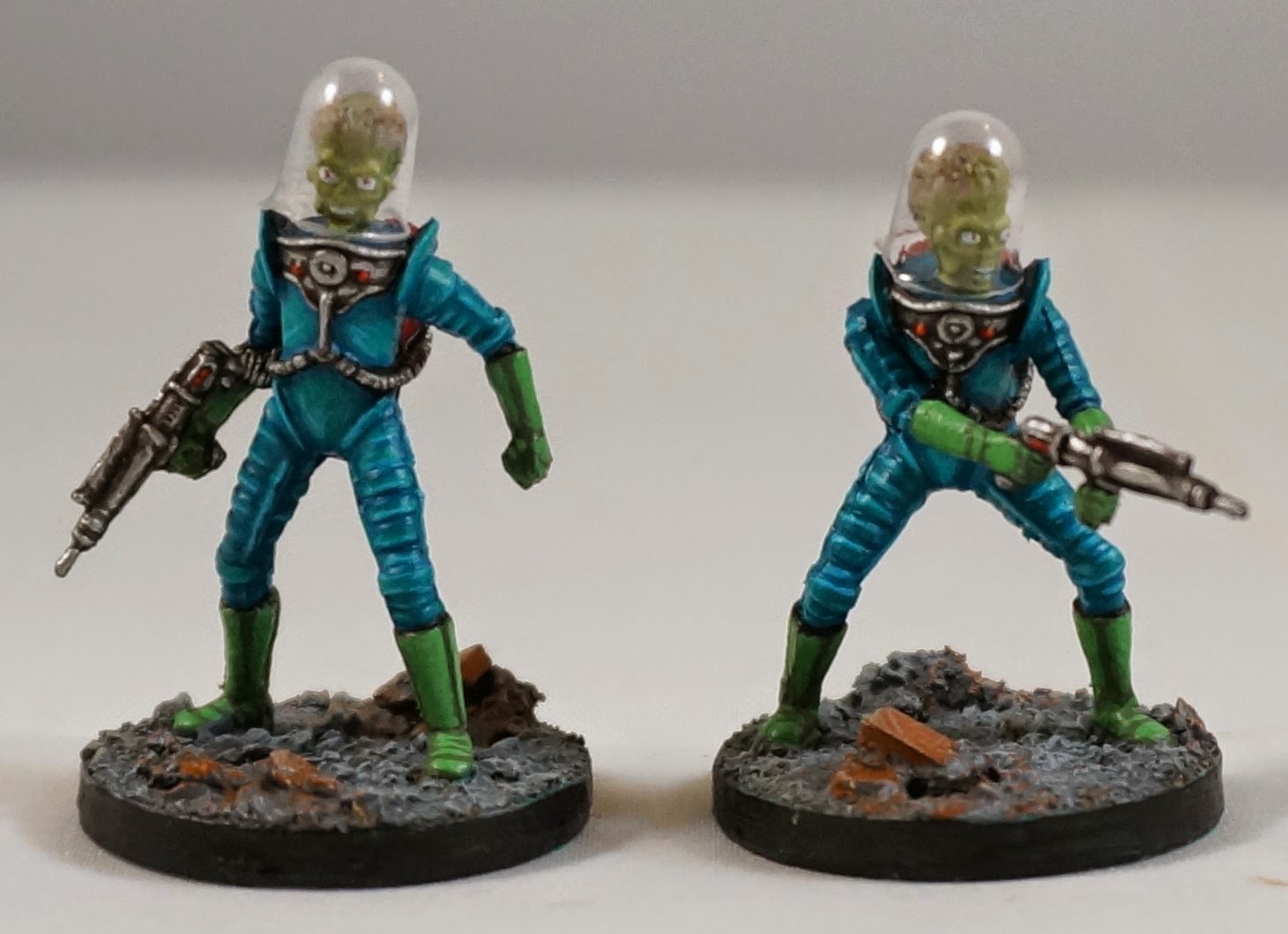 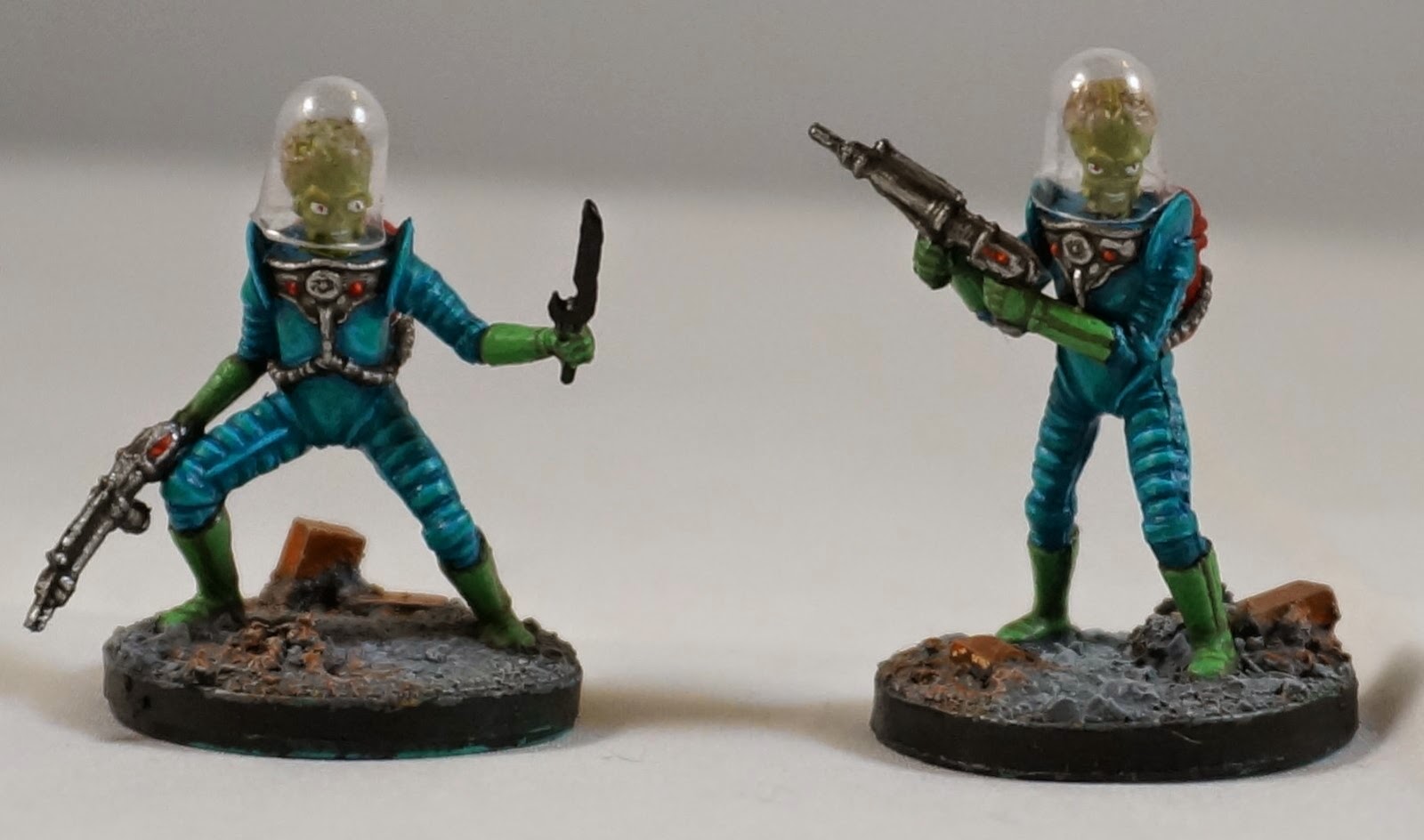 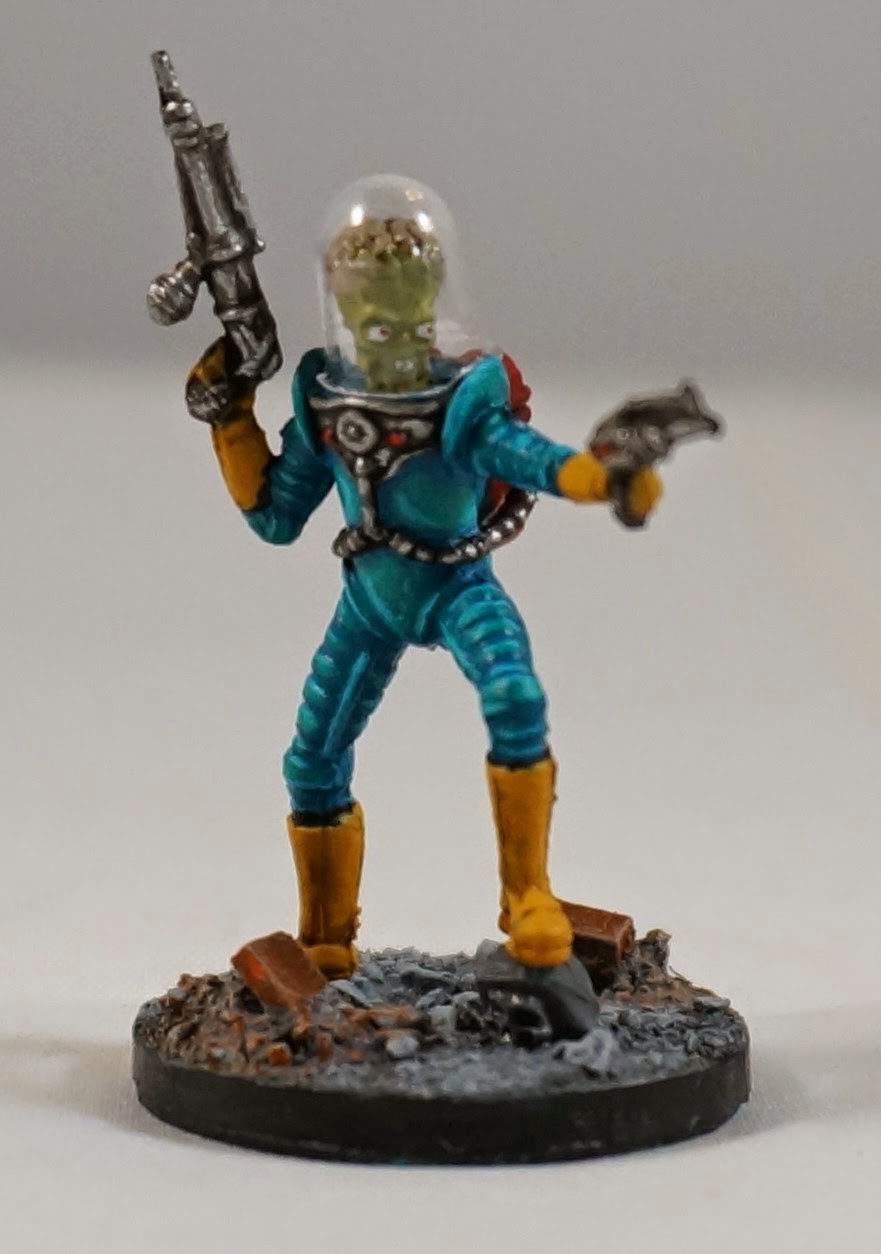 They need some tidying up mainly an extra highlight to the face and some work on the boots/glooves
however I intend to have a final pass over them all when I've finished more of them. Because of this the clear domes aren't glued on yet.

I'm tackling another 5 martians next, then I will likely do the martian General Tor Character.

In other news I shall be in attendance at the Horus Heresy weekender again next year with the normal shady Characters of Nife and Rictus, this time we will even be accompanied by Grizz.

Last time we went me and Nife challenged ourselves to enter into the painting competition this year, so I will be putting together a single model and attempting to push my painting. Given the quality of the stuff there last time I know I have next to no chance of winning but it should be a laugh.

Well its that time of week again.

I haven't been up to too much hobby wise this week. been trying to finish off a few paint in progress infinity models which hopefully should feature on here next week.

I have a couple of WiPs to show though, first up is Hasslefrees tribute to Kusanagi from Ghost in the Shell. A good friend of mine bought me this model for christmas a couple of years back, I have until now been afraid to tackle painting her.

Here is how she stands so far: 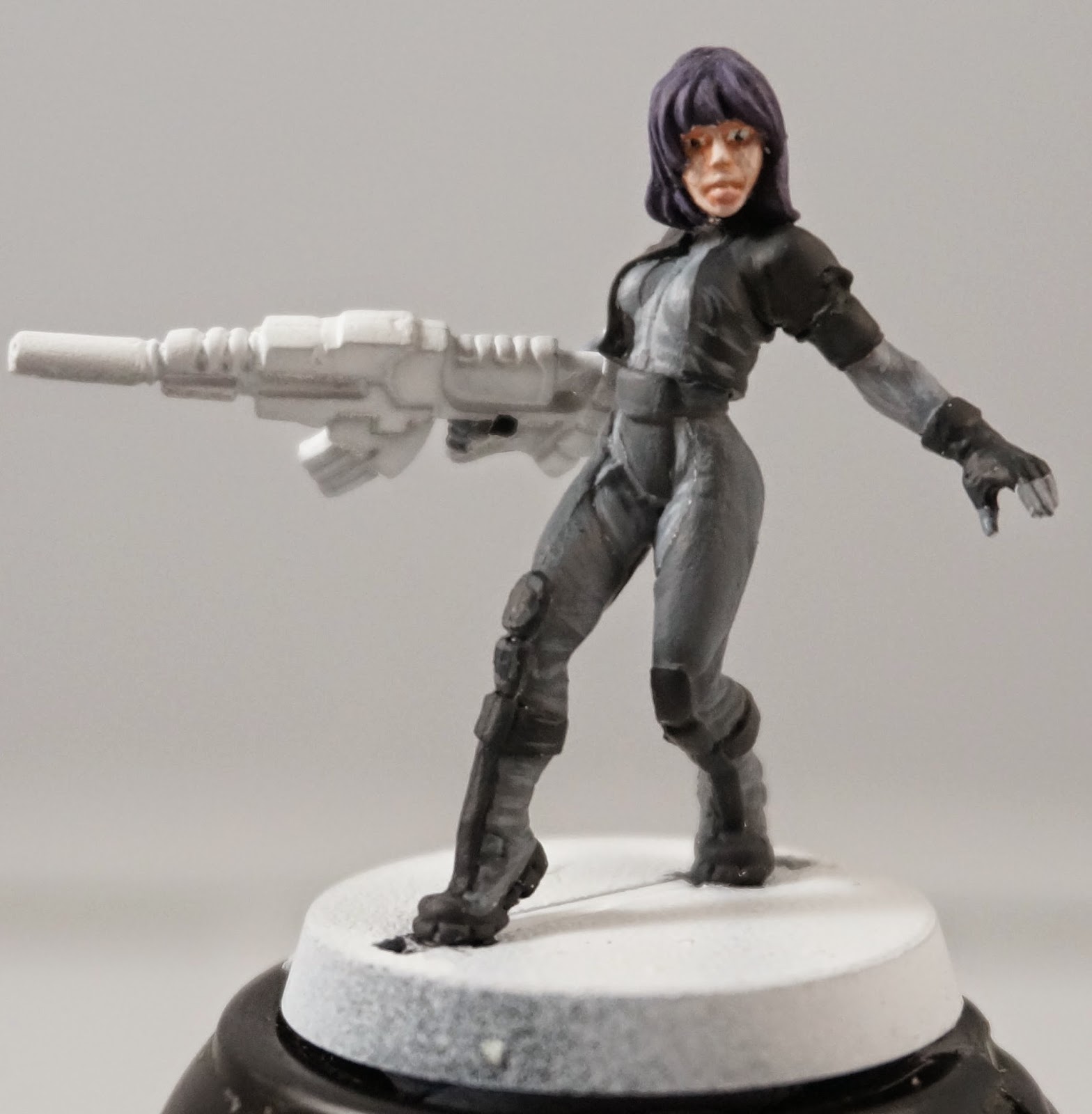 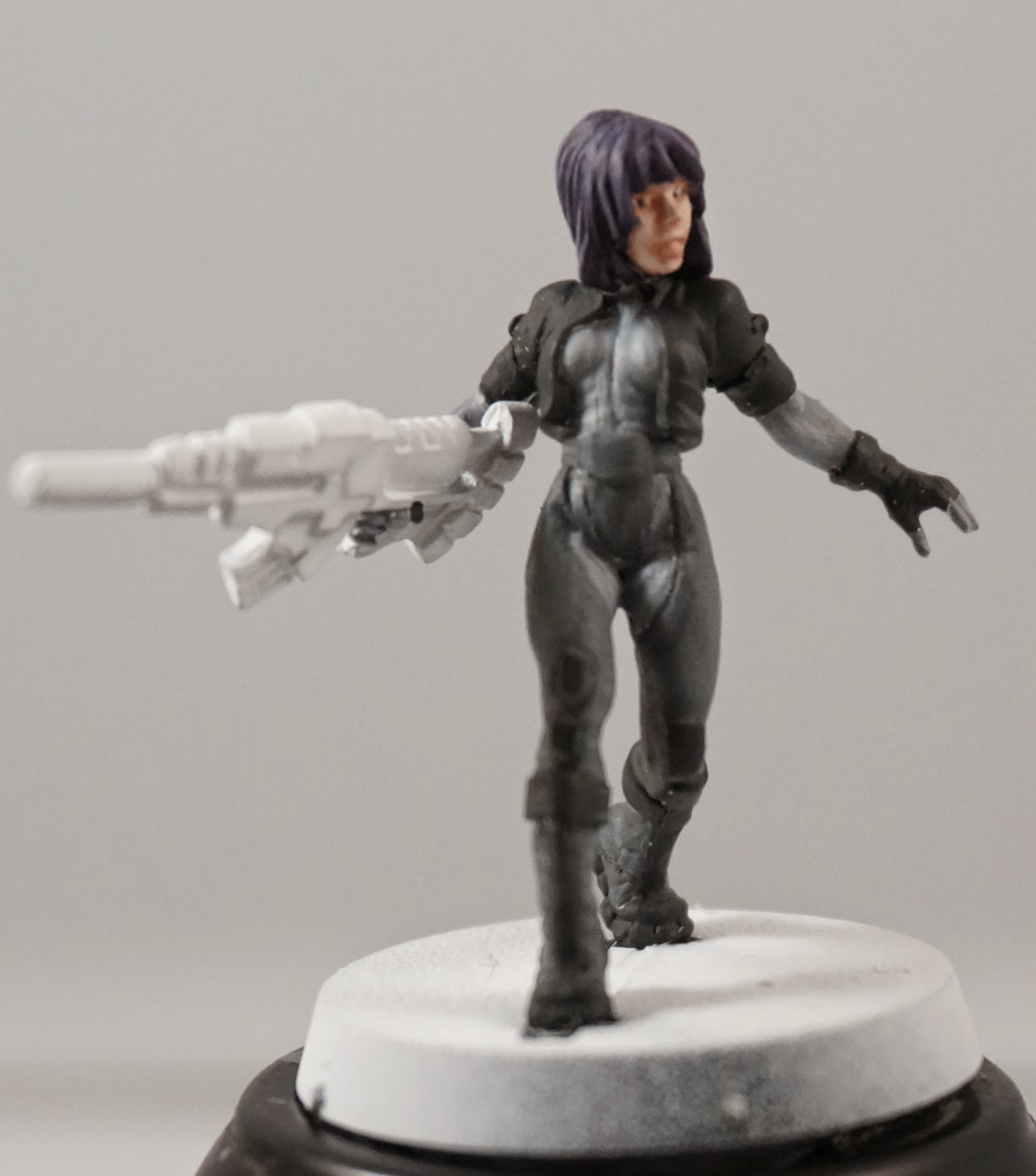 Pictures haven't come out the best in all honesty, she does look a lot better in person.

I need to get hasslefress tribute to Batou now to paint up along side her. Might also get their squad of power armoured guys too. Idea is to have them as a swat team and when combined with kusanagi and batou will make some NPC/objective types for use in Infinity/Deadzone

Next up is a WiP Ethereal. As mentioned in last weeks post I'm struggling to motivate myself to do much on the Tau they just really arent inspiring me: 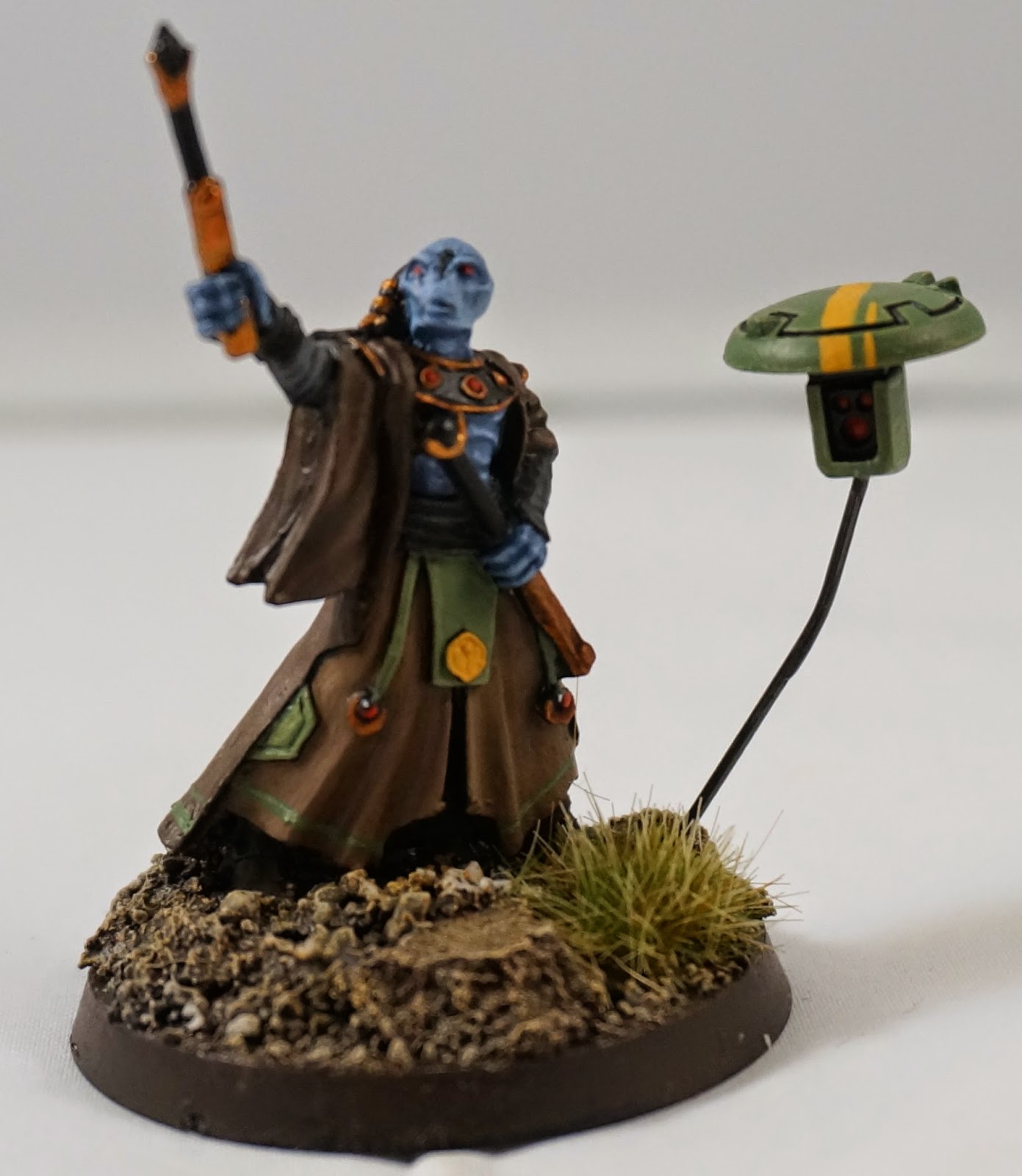 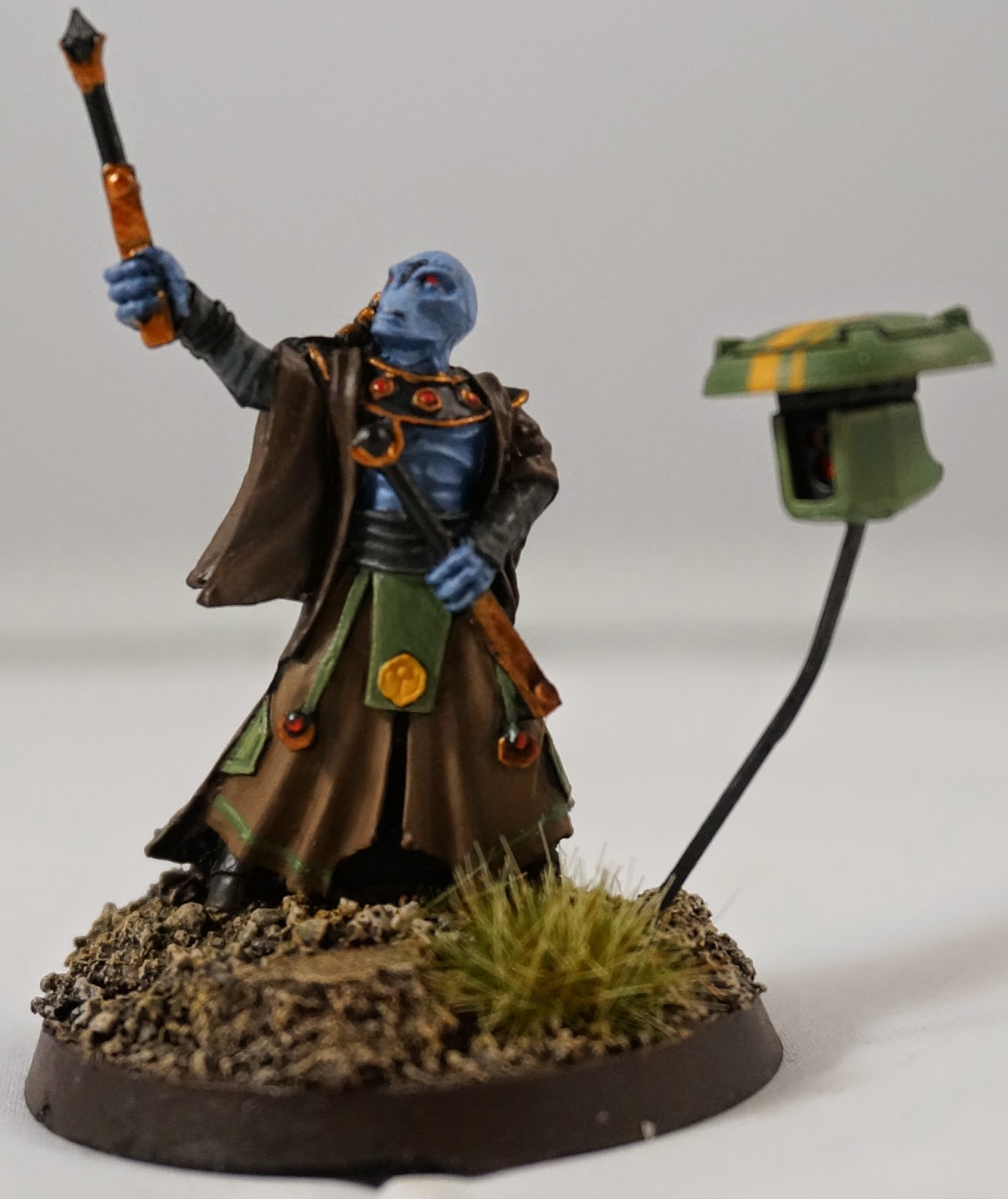 Added a little drone to his base to add a little extra character.

The final  hobby development for the week was this: 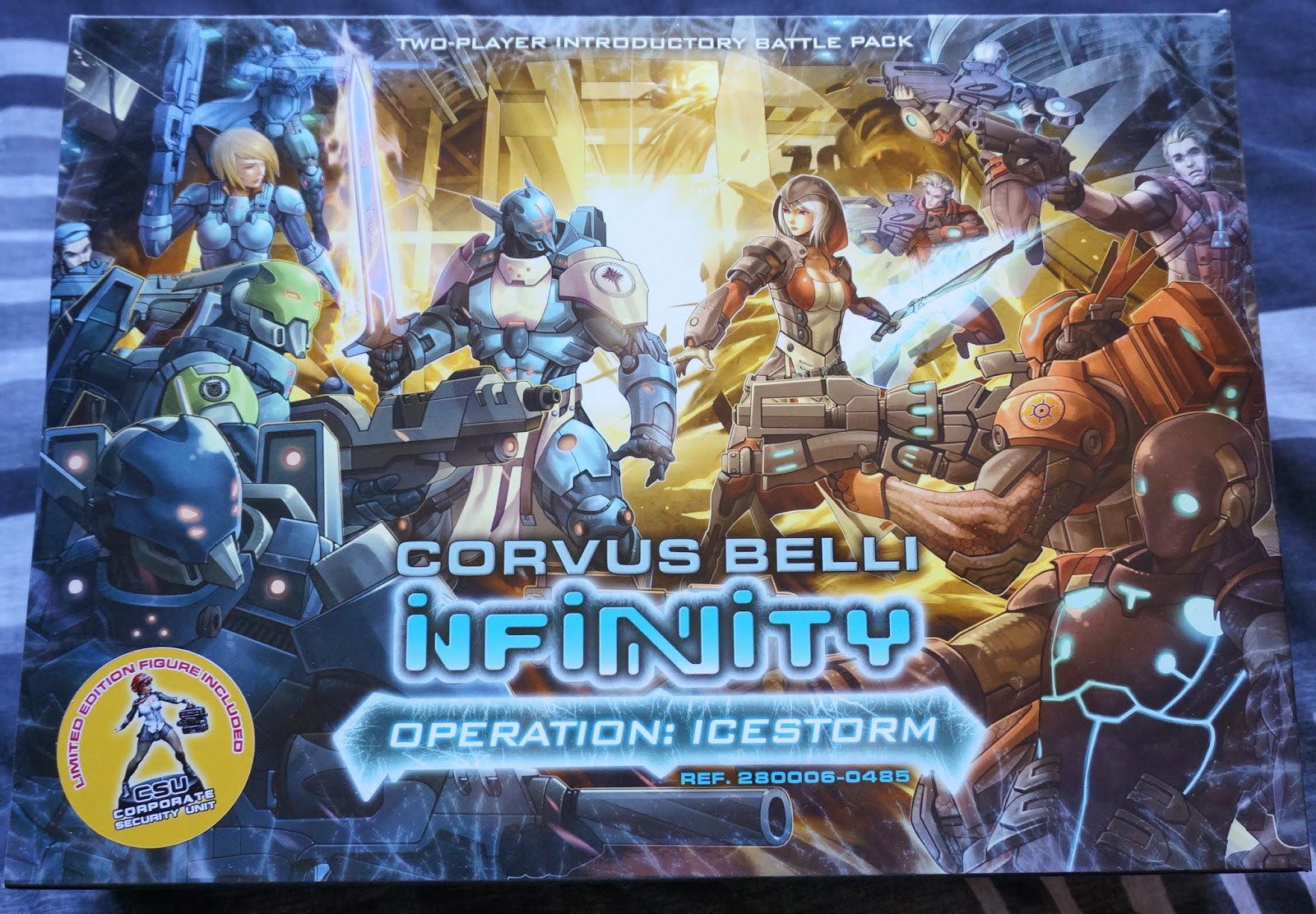 Thats right my copy of operation Icestorm finally arrived. Now the quality of the models in it are mind blowing. I shall be getting them built over the course of the week. I do however need to show some restraint in painting them and finish off some of the stuff I have already started.

Well thats it for this week, a small update but at least I'm still plodding along :P
Posted by Maelstrom at 15:58 3 comments

Time for the normal weekly update, as ever it is another Infinity themed one.

I have been plodding along with my first crusader brethren, this one is armed with a HMG I also have one armed with a combi rifle in my painting queue. Bar a few finishing touches he is pretty much done: 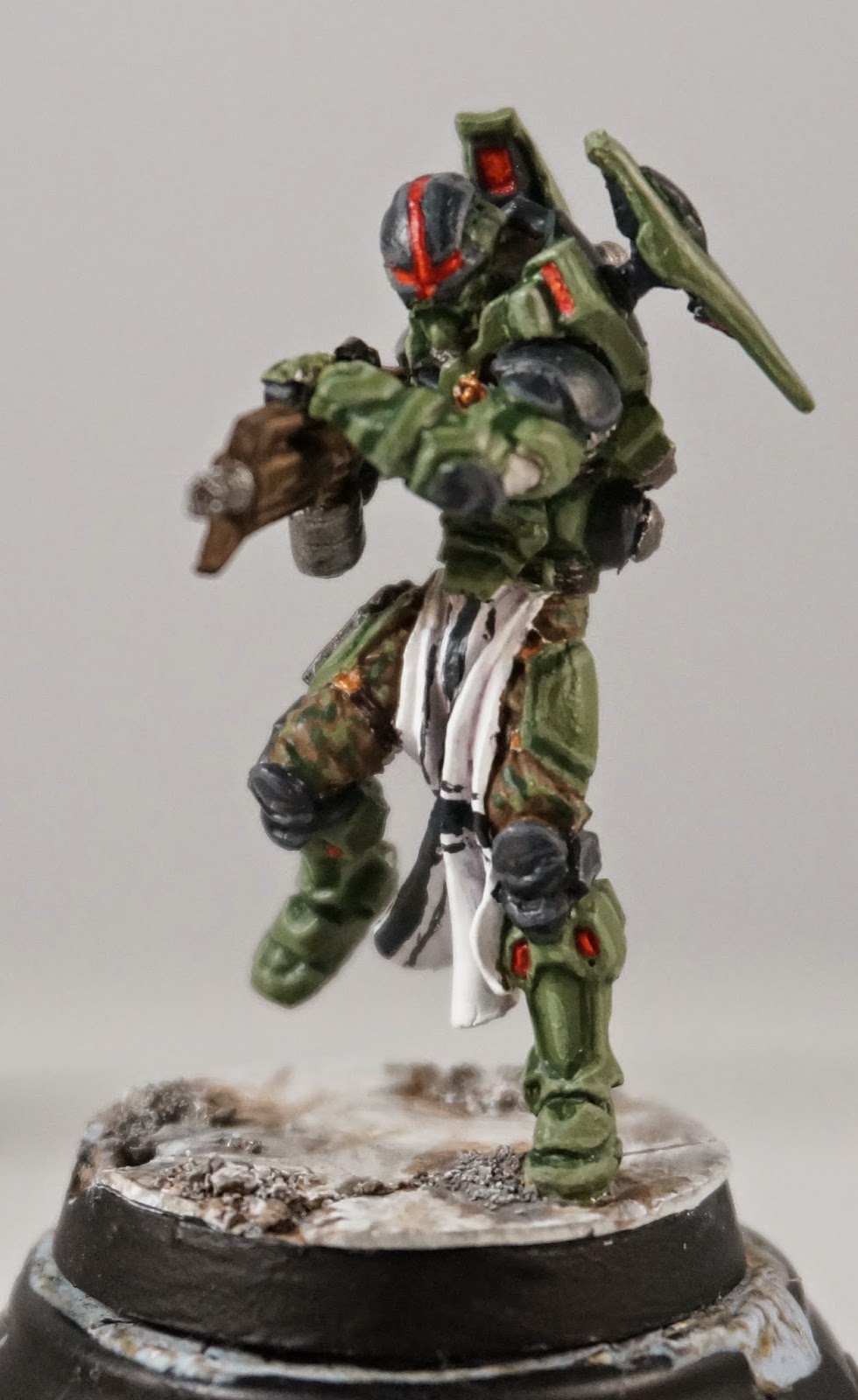 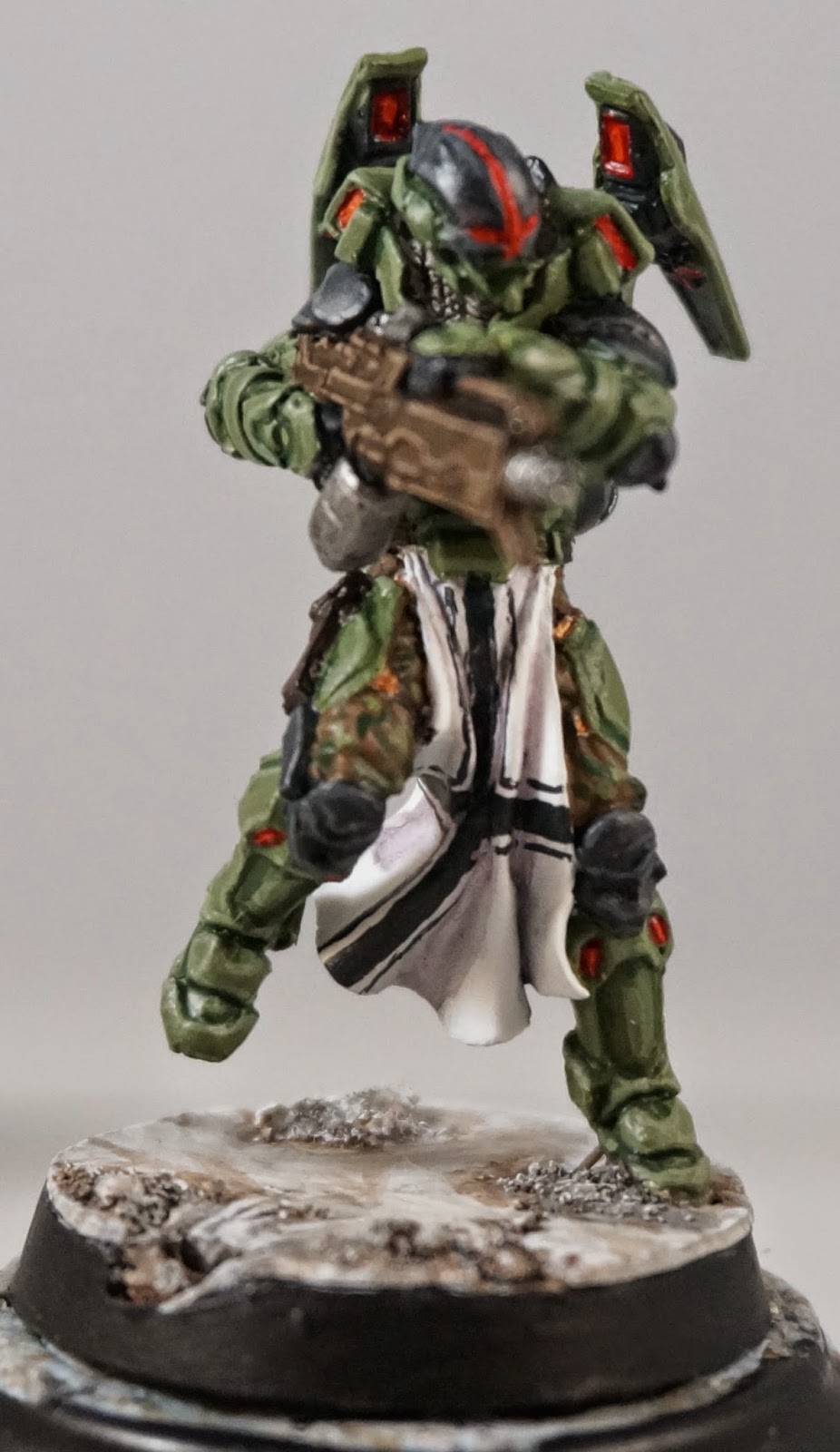 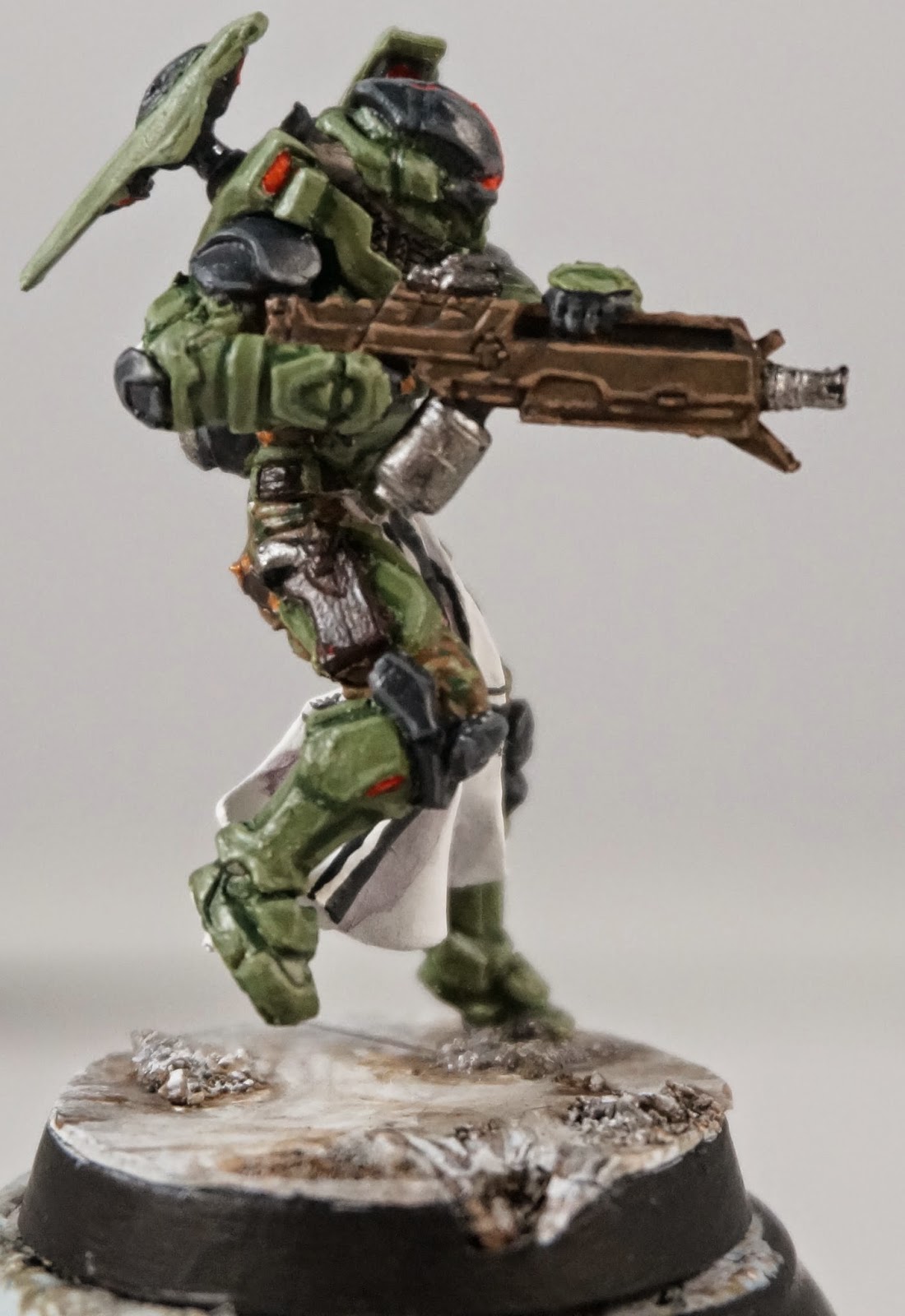 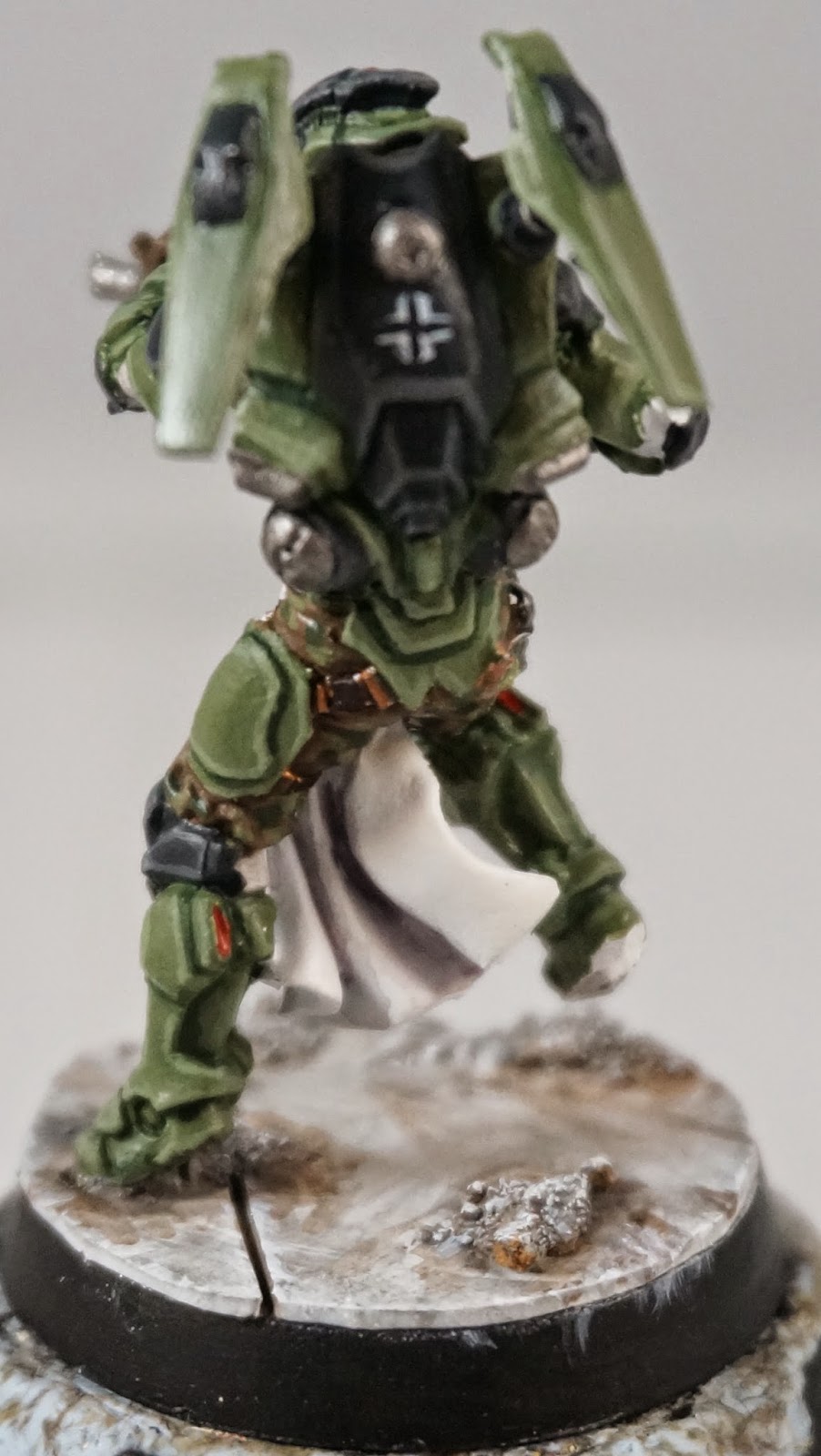 I have really enjoyed painting this guy, think he is my current favourite of all the models I have painted so far for the game.

Here is a sneak peek of my next model, a WiP Trauma- Doc: 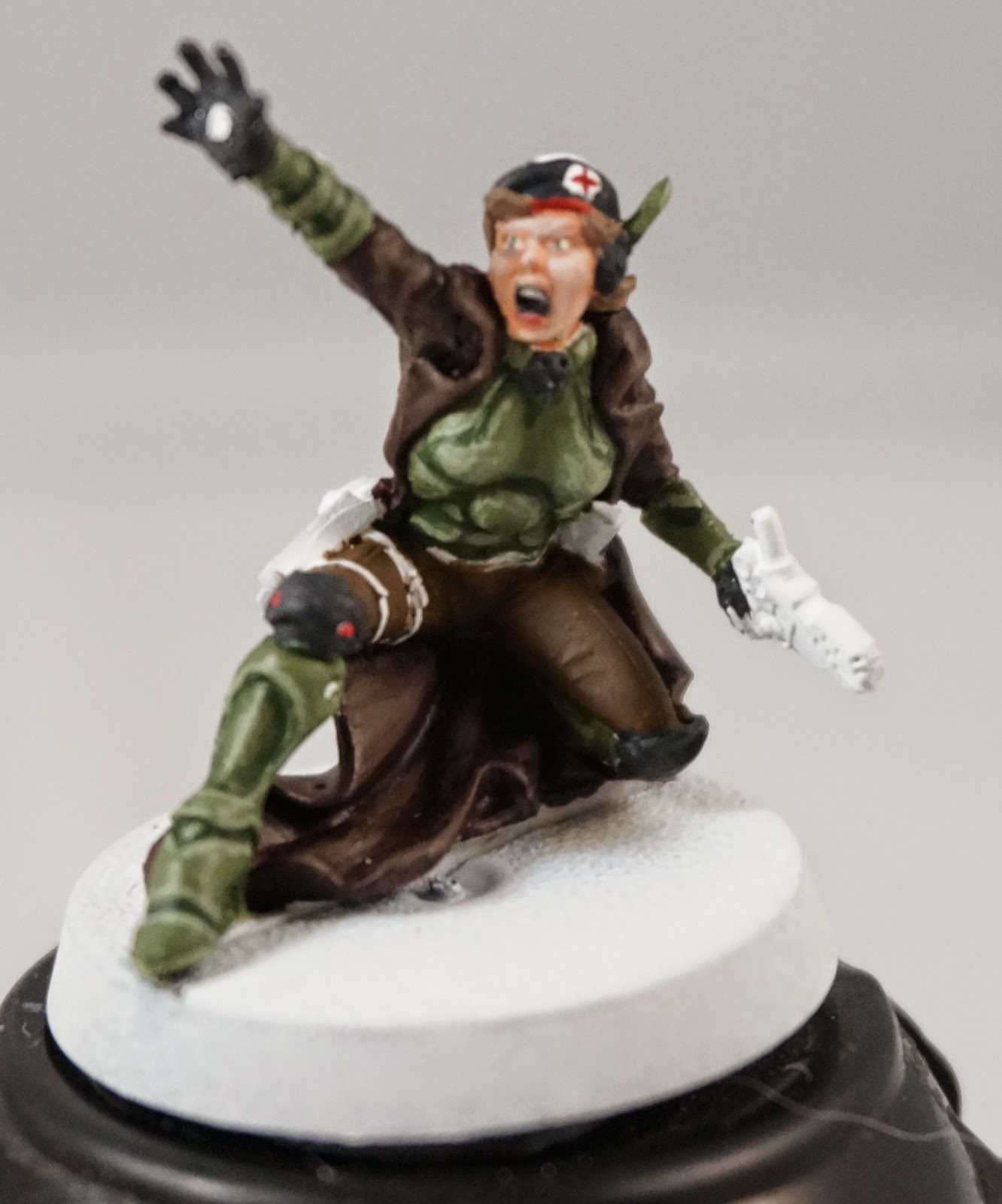 and the rest of the current painting queue:

I have a meet up with Rictus and Nife rapidly approaching where we will actually be playing 40k, I have a few planned additions to my Tau mainly repainting an Ethereal and fire warrior squad that I stripped an age ago.

I keep getting them out to paint and literally managing 5 or 10 minutes on them before getting bored and going back to whatever infinity or deadzone model I am currently working on. Mean while Rictus is blazing away on his Daemons, the speed of his painting has begun to scare me haha.

I have said it before but I will say it again I seem to have lost all interest in GW stuff, it barely motivates me to actually want to convert or sculpt anymore, something which used to be a huge part of the GW side of my hobby time.

Times change I guess, seems boardgames and skirmish games have become more my thing
Posted by Maelstrom at 17:43 5 comments

This is a bit of a first for me, that is writing a review(well more my thoughts). Today I received an order I placed from Antenocitis workshop, that being their newly released futuristic cars for use with infinity.

I opted for the "Town" vehicle set and the "Tucuxi" sports car (which I have had my eye on for a while).

I have been after some vehicles to use as scatter terrain for Infinity and Deadzone for a while now, even scouring the local pound shops for toy cars to no avail. When I spotted the vehicle sets earlier in the week I knew I had found exactly what I was after.

Here are some pics: 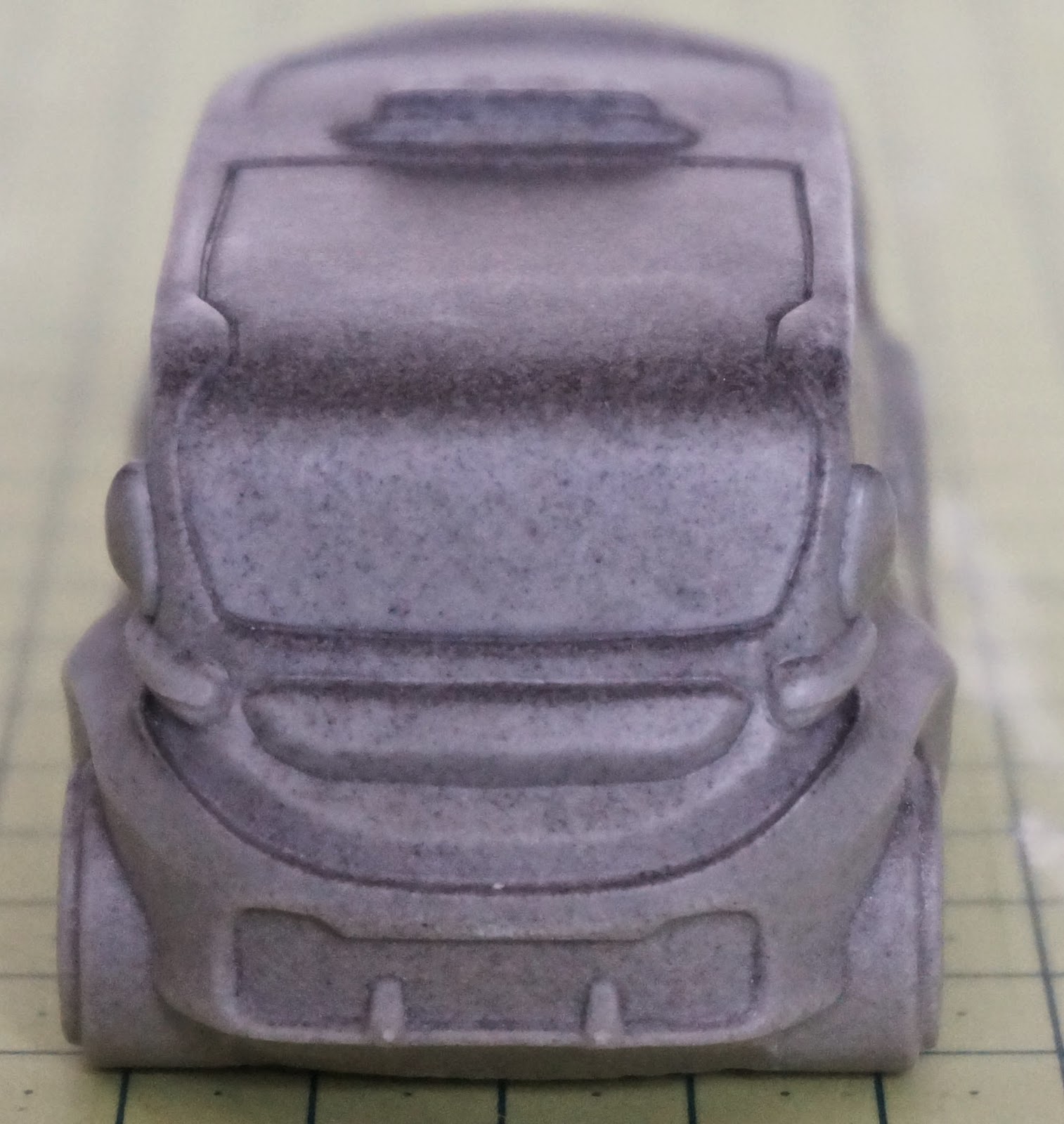 The casts are absolutely perfect, not a single issue on any of them.

No mold lines either so after a quick wash these will be ready to paint straight up. I think they have hit the near future vibe on the head perfectly with these, with my favorites being the little transport pods.

Below are a few pics of them with an order sergeant for scale: 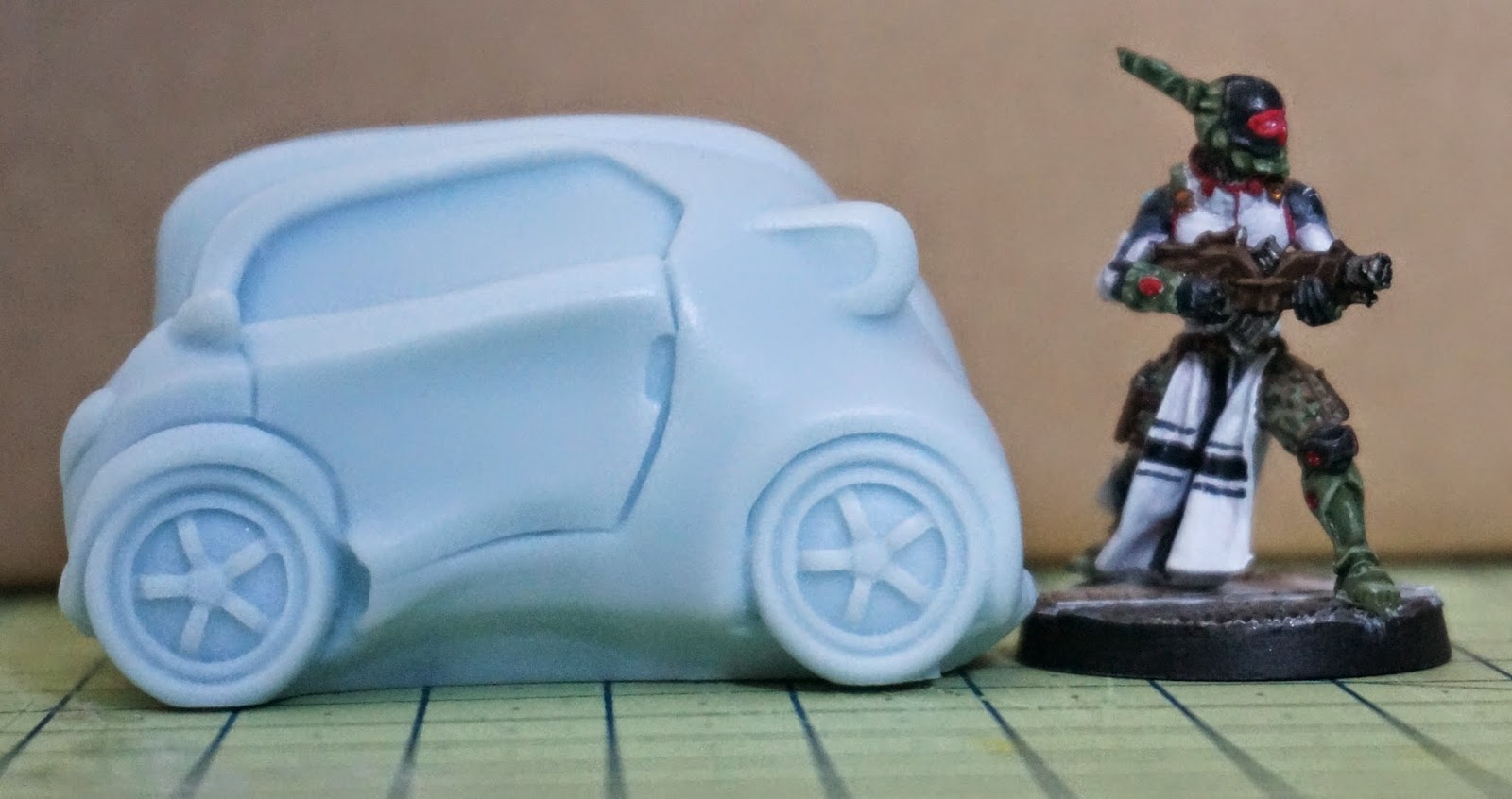 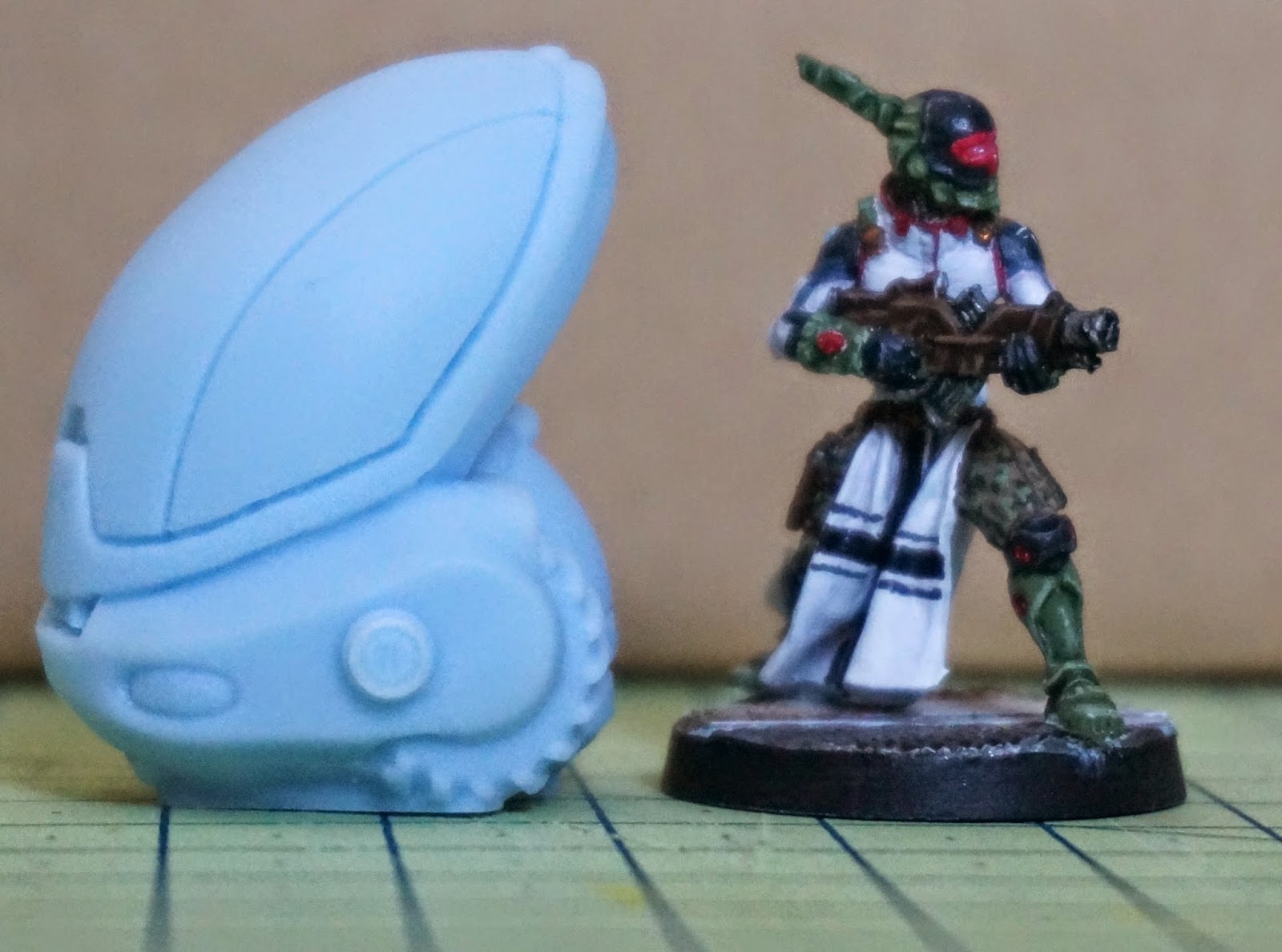 I can whole heartedly recommend these sets, they are very reasonably priced and the quality is fantastic. This was my first order with Antenocitis and I think I shall be purchasing from them again......already have my eye on the police interceptor haha.

So that wasn't the best of reviews but I hope it helps out any of you who are sitting on the fence.

This update is a day later than normal so my apologies.

This update sees my return to infinity after a break to work on deadzone. I'm Plodding away slowly on my PanO stuff. Below are some WiPs:

First up my near finished magister knight, he just needs a bit more tidying up and a base making: 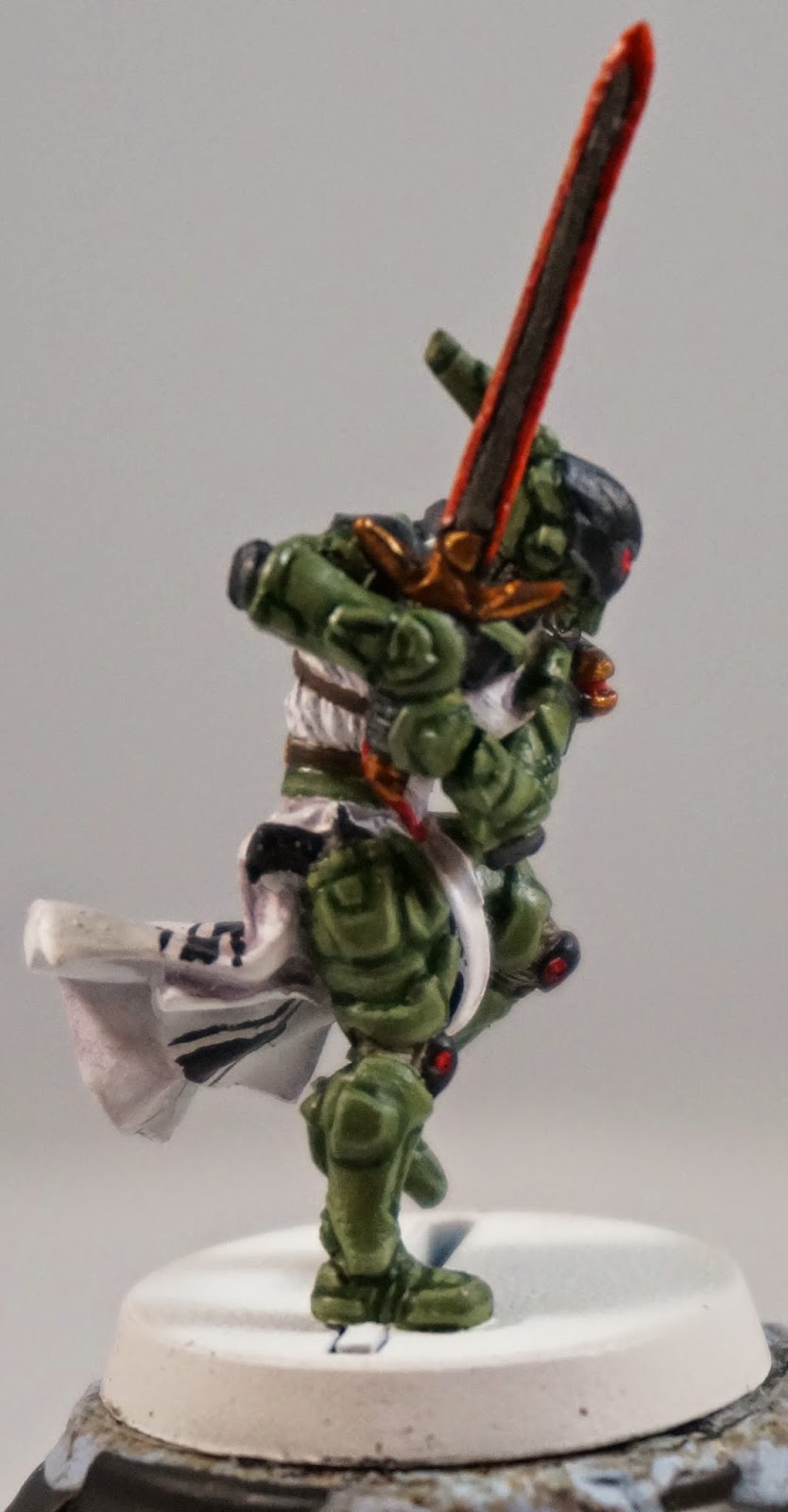 Next up is one of the models I've picked up as part of my plans to expand the PanO force in Operation Icestorm. The force will be the generic PanO list to give me more variety than my more specialized Military Order force.

So we have a sneaky Hexas with a sniper rifle, love the sculpt. She is still rather WiP: 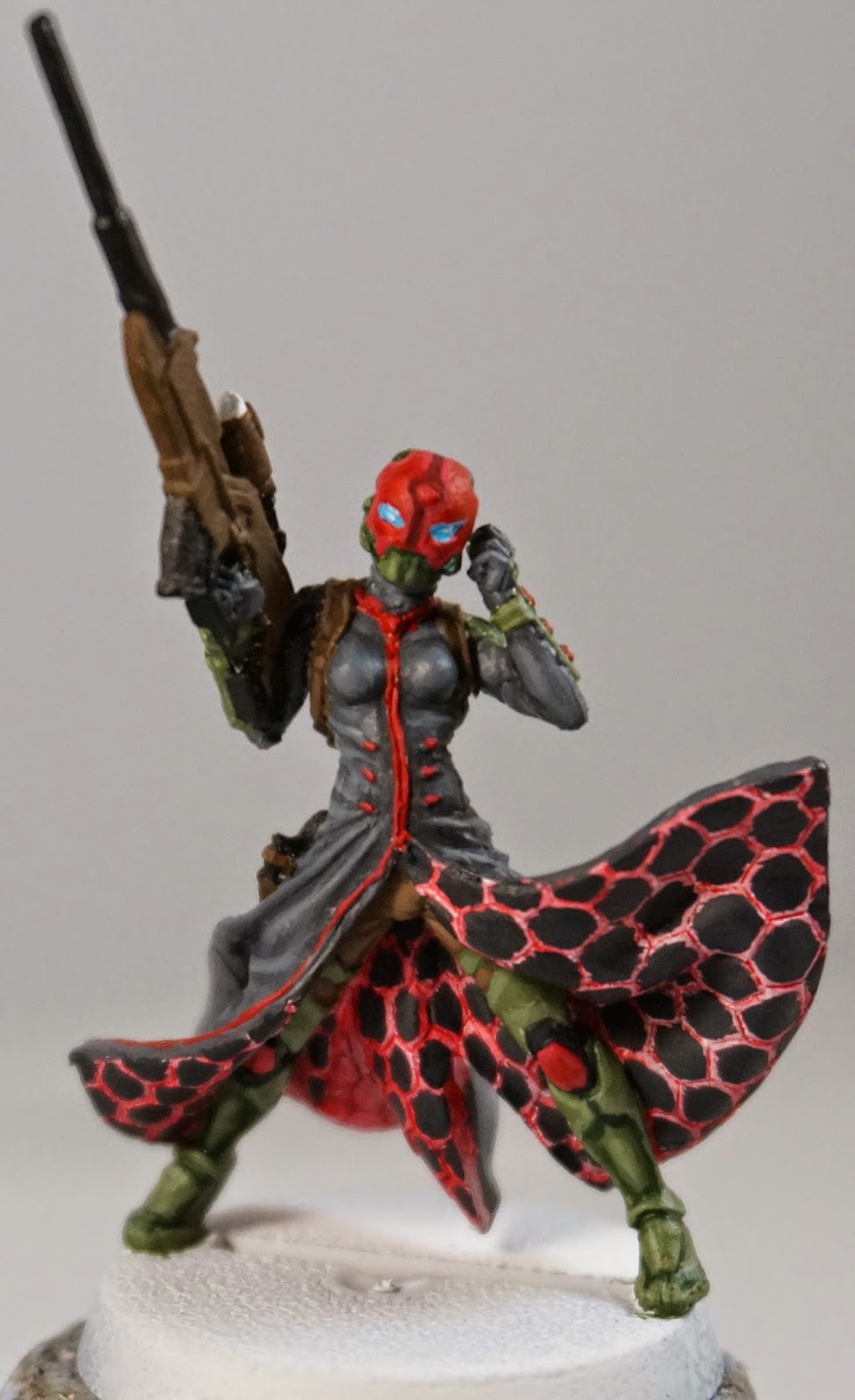 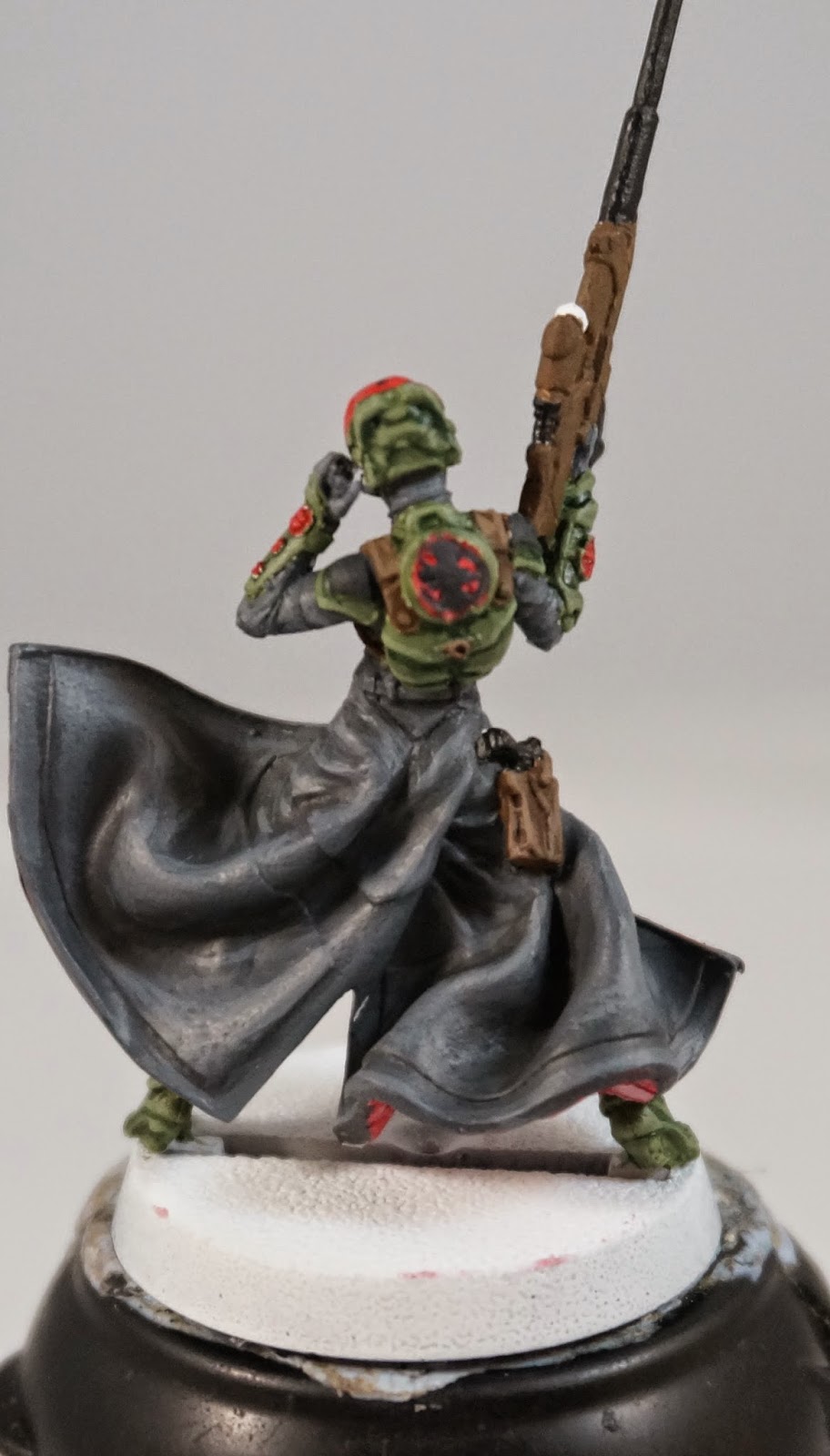 Thats it for now, a rather short update. I will be back over the weekend with a bit of scatter terrain and a few more WiP Infinity bits.
Posted by Maelstrom at 20:24 1 comments

A normal weekly update for you here. This time some pictures of my much threatened WiP Deadzone strike forces.

I've had a starter set of Enforcers and various other deadzone bits such as Terrain and a gaming mat knocking around for a while now. After having a few games with Nife and Rictus at our last meet up and the game itself going down well I figured it was time to pull my finger out and get some painting done.

Here are all the Enforcers that have got paint on them so far. There are only 4 more that need painting plus 2 sentry guns. Most of the below guys still need tidying up and finishing touches on them: 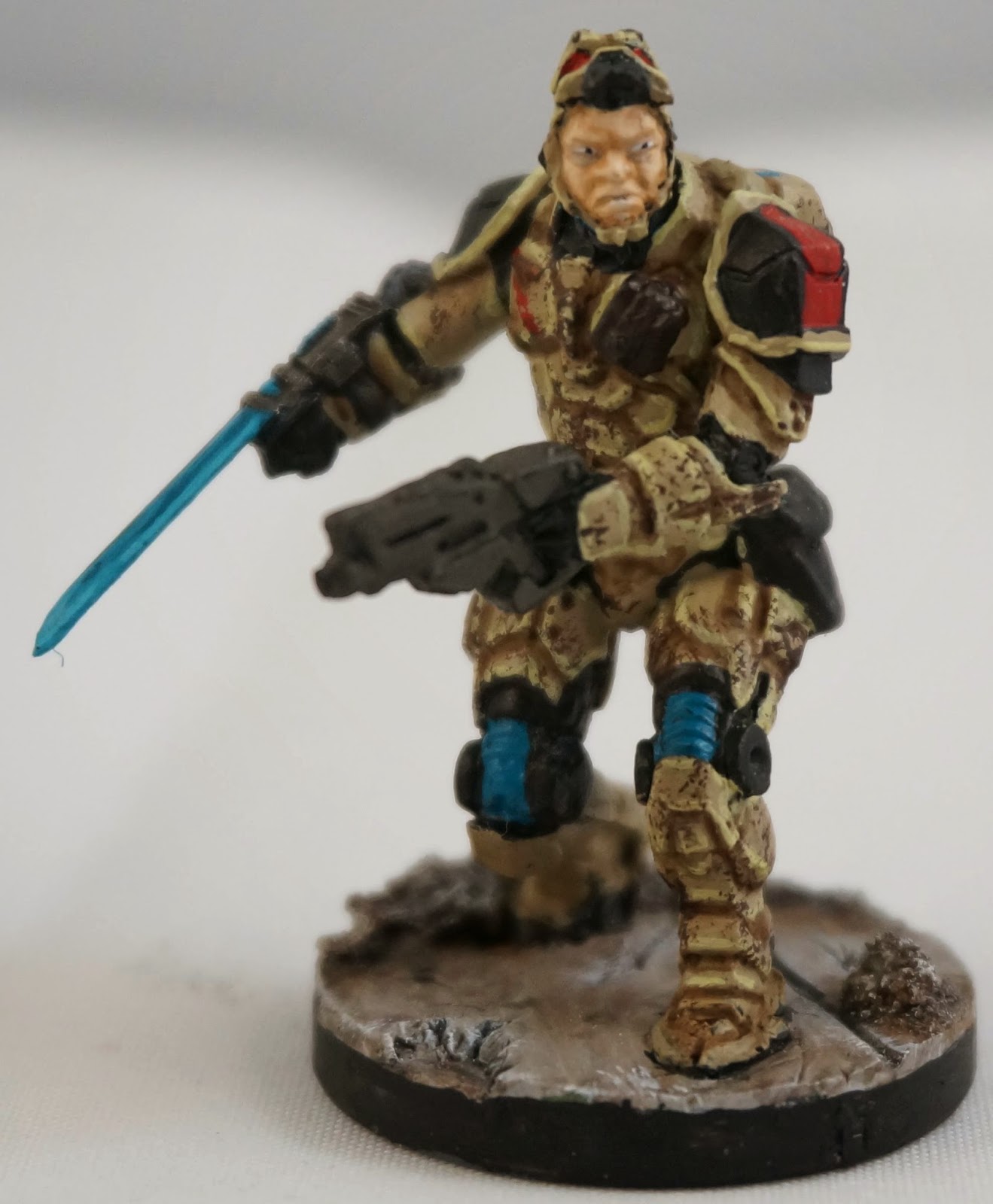 I have gone for more basic paint jobs than on my infinity stuff so no mixing of colours and other more time consuming methods. I have however been weathering them with sponge. 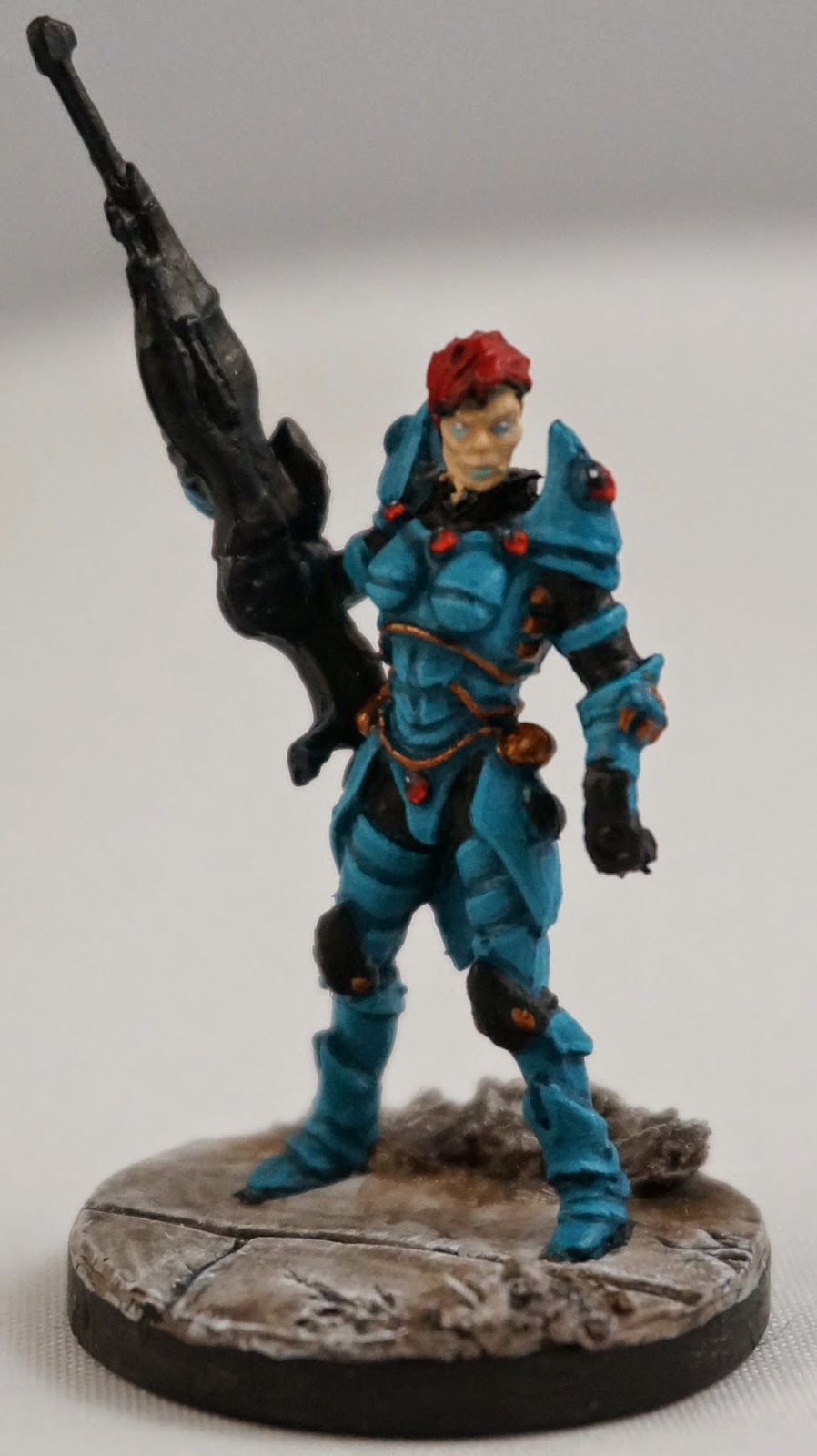 Speaking of Asterians after the success of our games I took the plunge and ordered the Sky Shadow Infiltration force bundle from Mantic. This gave me an entire Asterian starter force plus a box of Asterian specialists, the new expansion book, wave 2 cards and a pre release character for a rather good price.

I have yet to build the specialists but have managed to get the starter box built:

I do rather like these guys, very much remind me of star wars battle droids or the Geth from Mass Effect. Fluff wise they are all drones controlled from afar well apart from the commander who takes to the field in person.

Rather looking forward to getting some paint on them.

In my final nerdy moment of the week I stumbled upon some trinkets for about 30p each:

Me being a bit of a green lantern nerd I picked up the rings of my favourite corps as a laugh :P

Thinking of Comics, my normal partner in crime in comic book related stuff(he did get me started on them again after all) Mr Feral has started up a little blog where he reviews some go check it out if you like the odd superhero Sharky Reads Comics
Posted by Maelstrom at 17:13 1 comments