Well another year is pretty much out and we are ready to welcome in another or if you are of a certain belief the end of the world............whats this apocalypse attempt number 6? haha

I've been rather active on this blog over the past year and have increasingly moved to it from forum posting, whether thats because the forum scene seems to have slowed down from the economy or others also moving to blogs who knows but I guess its all good.

In hobby terms this year has had its ups and downs I've probs started more projects than I would care to list and finished none of them, we get to recent months and all interest and mojo have dried up. I hope by having a break until the new year it will reinvigorate me some more but its quite possible that 2012 might herald my depature from the hobby......... maybe thats my apocalypse hahaha.


So I figured I will as a New Years resolution try and stick to a set list of projects for 2012 so here we go:

Battle Fleet Gothic: Imperial Fleet : This is to appease Rictus who has now finished his entire Nurgle fleet (HERE) if I can sort this out I can actually start playing a few games against him which might get the mojo flowing more.

Infinity: Rasmus my evil Danish Friend has talked me into buying an Infinity starter pack, gone for the Yu Jing Imperial service starter: 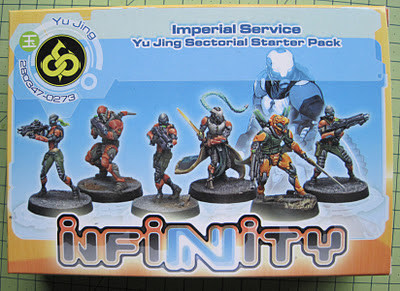 These will be a painting project largely and as its only 6 models I can take my time.

Chaos Legions: If the rumours are true then a chaos legions codex might appear during 2012 at this point I might return to my Word Bearers and do a new 1000-1500pt army salvaging what I can from my old army and if GWs prices dont increase(thats hoping for a lot......) possibly use some new models. Of course I could always do something different instead of Word Bearers again, possibly explore the black legion, Iron Warriors or night lords. Of all the projects listed here this is the one most likely not to happen.

Mordheim: Part of my agreement to do BFG with Rictus was that we would both do Mordheim warbands. I really enjoyed working on my slaaneshii cult of the possessed and would love to get back to them despite not being entirely happy with the GS work. I am planning an undead warband to use up a box of skeleton warriors I've got as well.

Batman character busts: I want to get back to large scale clay sculpture, after having decided to give a third term of my course a miss I've suddenly got an itch to make something. I have a bag of clay and would like to do some busts of Batman characters, at the moment the first batch will likely be Two Face, Harley Quinn, Joker and Scare Crow.

As you can see from the list I'm steering pretty clear of large army projects the Chaos legions thing is only a possible, there will likely be a few random models mixed in with that lot but in general these will be my main projects of 2012

So I wish all my followers and those who read my ramblings a Merry Christmas and a Happy New year and I hope to be back in action in a few weeks time :-)

Before I go welcome to new followers Warpaintguy and David, cheers for the support guys :-)