I've given the blog a bit of an overhall and facelift, been a while since I last updated it and I fancied a change from all the black and red. Plus my skills at making banners and the like have progressed a fair bit since my previous ones.

I've made a trial gallery header too on the red corsairs gallery page, might be rather nerdy quoting the codex and that but it adds a bit of character to the page :P

let me know what you think guys, and I'll be back with a proper update in a few days time.
Posted by Maelstrom at 23:04 3 comments

Small update well text heavy update. Its been too hot and humid to really sit down and focus on hobbying for the past week, I think all I have achieved in 3 days off is to saw up a few more chosen so they are ready to be turned into plague marines.

I have however sorted out my modelling cupboard: 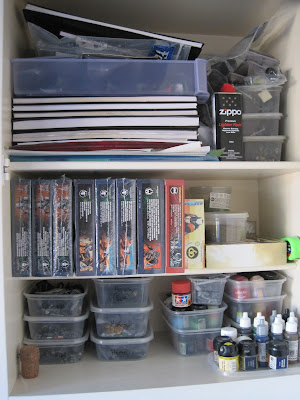 Far far far more organised than it was before, I actually can find stuff now. Also added my current Corsairs projects to the corsair shelf of my cabinet, there may be the odd thing in there that I haven't shown on here yet:

So onto the point of this post some very inspiring blogs that have been catching my eye:

Officio Convertorum is the blog of the highly talented Jeff Vader, he specialises in creating some fantastic INQ28 models and more recently has been creating his own minor Chaos God complete with lesser daemon models, as well as plenty of concept art.

The blog of Sheep a fellow victim of the nagging of Rictus, Sheep produces some amazing work one look at his latest creation a Ad Mech knight titan is all you need to see. His Tyranids and Sons of Horus marines in particular are worth a look, as the marines in particular I have drawn plenty of inspiration from.

The log of another talented modeller called DarkVen, this is possibly my favourite chaos marine log from across the forums at the moment. His specialises in heavily customised and characterful marines, his approach to his army is very much the same as mine and I hope my corsiars will look as good as a army when they are finished as his collective force so far looks.

Well thats it for now, I hope to have another plague marine update in a few days time.

Its been quiet in here of late though I do have reasons 2 6 day weeks at work followed by a week away in Scotland visiting family and friends. Thus work on anything hobby related has slowed to a crawl.

I do however have a quick update to stop rictus from hassling me :-P I've recently started working on a few red corsair bits, mainly so as I have time to try and get them painted before my next meet up with rictus and nife.

So finding I still had my DV chosen left, I searched for a use for them, given they don't fit in with the style I have done for the regular corsair squads. I settled on converting them to plague marines who are fighting under hurons banner: 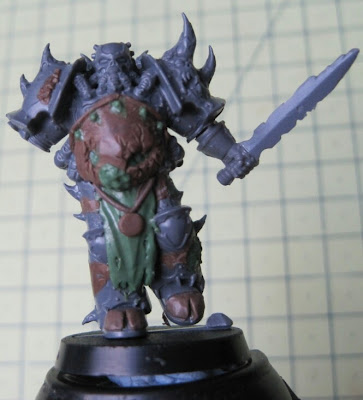 The heavily warped nature of the chosen really aides in the conversion, plus given I intend them to be death guard they actually look 10,000 years old.

I'm planning on doing a squad of 7 of these guys which should prove useful in games of zone mortallis.

Well thats it for now, will hopefully have gotten a bit more done over the weekend.
Posted by Maelstrom at 20:41 12 comments

It's update time, been slowly workong on some bits mainly so as not to push my hand too much and set it off again. Main project I have been working on is another Inq28 model.

This one is a fun little project as after dropping PDH a PM over on the Ammo bunker asking if it was possible to have a contact card(random cards given out at Molotovs Inqvitational events). He had a word with Molotov and Riseofthemagi and I was given a choice of 2 cards to use as the basis of a conversion. I picked the below: 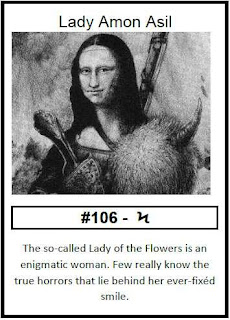 This one is a rather blank canvas, I've opted to have her as a highborn nobel woman who despises her own kind and thus takes great pleasure in killing them off with poison. This poison she cultivates from various poisonous flowers,

This is the conversion so far, the base mode was the high elf hand maiden: 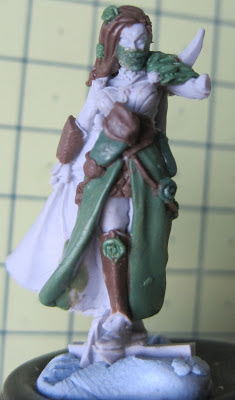 rather pleased with it so far, the smile though has been a pain to do I'm still not fully happy with it yet.

In other news I ventured to Warhammer World with Rictus last week and for once only came back with the basis for the above conversion and 2 art prints: 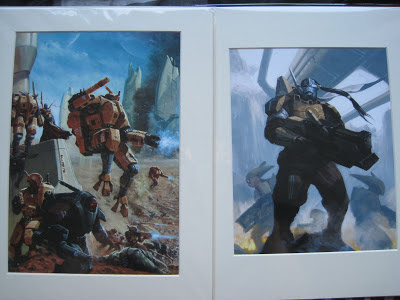 Can't go wrong with a bit of Tau stuff, infact I have returned to updating my old army a project I haven't touched in probably 2 years. As part of that project I shall be setting myself a challenge and the reward for completing it will be a Riptide battlesuit. Whats the chalenge I hear you cry, well I shall earn a riptide once I paint 100 models...................you can laugh now

Given I have such a back log of stuff such as Sedition wars, Quest, Red Corsairs, Epic, Heresy era White scars and the Tau themselves I have more than enough variety to keep me going.

Wish me luck haha
Posted by Maelstrom at 20:18 4 comments